Britcher, Sweeney giving women's doubles luge a try for US 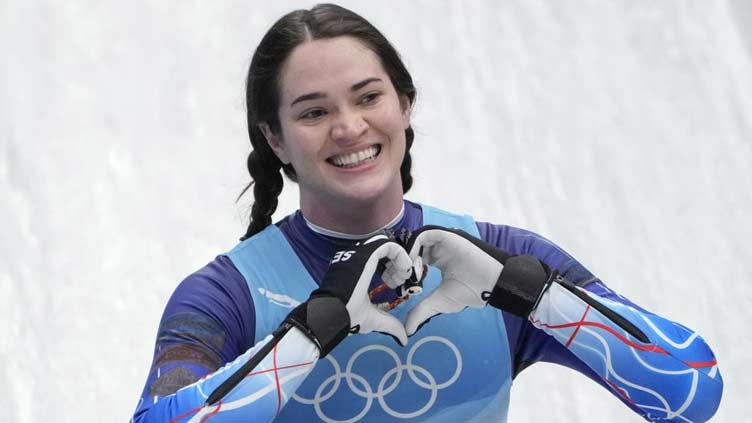 Britcher, Sweeney giving women's doubles luge a try for US

Britcher, Sweeney giving women’s doubles luge a try for US

Being on a sled together was not part of the plan. Until now.

Britcher and Sweeney, the two most experienced women’s singles sliders that USA Luge has on its current roster and two of the most accomplished in the national team’s history, are going to compete in doubles together at some World Cup events this season — the first steps toward what could be a run to the 2026 Olympics, when two-woman luge will make its debut on winter sport’s biggest stage.

They’re not giving up on singles. But women’s doubles is a relatively new thing in the luge world, and they see enormous potential. The World Cup season for luge starts in Austria on Dec. 3; the World Cup slate for sliding’s other two sports, bobsled and skeleton, opens this weekend in Whistler, Canada.

“It’s crazy how quickly we became a team,” Britcher said. “We’ve been teammates, but now we’re a team. And it’s been really exciting to share this experience with somebody, because it’s kind of like the coolest second chance ever.”

It truly is a second chance, in a lot of ways. Both are highly accomplished on the World Cup circuit. Britcher has more wins than any U.S. women’s luge athlete ever with five and has claimed 25 medals overall when factoring in relays. Sweeney — who broke her neck and back at the 2018 Pyeongchang Olympics — has one win and 10 medals on her resume. Both have a world championships medal.

But neither has medaled yet at an Olympics — Britcher is a three-time Olympian, Sweeney a veteran of the last two. Britcher was strongly considering retirement after the Beijing Olympics in February and spent the months that followed looking for a reason to keep sliding. Sweeney also contemplated her future.

“Yes, we’re doing this fun adventure together and this fun challenge, but we still believe in ourselves as singles athletes,” Sweeney said. “I think that’s really kind of unique. I’m relying on Summer completely for doubles, but at the same time, if she says ‘Hey, no, this is too much and I need to focus on singles,’ then I still have my singles that I can focus on as well.”

This whole notion — Britcher and Sweeney together on a sled — had been a running joke for more than a year. USA Luge coaches would tease them about the idea. Nobody was taking it seriously and neither slider seemed that interested. Then about a year ago, Britcher started teasing Sweeney about it as well. Once again, the idea went nowhere.

“At some point,” Britcher confessed, “it shifted to maybe where I wasn’t entirely joking.”

So, she kept teasing. Sweeney didn’t budge — until this spring. It was May 31, a day or so after the end of a vacation with many USA Luge teammates, and Sweeney saw the light. She opened up Instagram and fired off a direct message. “(Expletive), let’s try doubles,” she wrote.

Britcher sent a selfie, her mouth agape. She was stunned.

With that, they were off. They’ve spent $13,000 of their own money for a new sled — without much in the way of help from their federation — and pulled a whole bunch of strings to get it built in time for this season. The financial sacrifice they’re making is significant, and they’ll also sacrifice some World Cup points in singles by spending time on doubles.

If this goes to plan, it’ll all be worth it.

“We’ve both had quite a bit of success on our own, and I certainly believe in us as a team,” Britcher said. “But we’re coming in as a new team in our 20s and there’s just not really a pathway to get those resources unless we make it happen.”

“And we made it happen,” Sweeney said.

“We made it happen,” Britcher said, almost in unison.

Yes, there are times when they even finish each other’s sentences. They’re already clicking.

The best doubles luge teams have an unspoken bond where one knows exactly what the other is doing and thinking. Aerodynamics dictate that taller teammate is almost always the “top driver,” and in this case, that’ll be Britcher. The “bottom driver,” Sweeney in this case, acts as the suspension for the sled and helps with the steering. She won’t see much on their feet-first slide down icy chutes, other than the back of Britcher’s helmet.

Now comes the two most experienced women on the U.S. roster to join the doubles party. And in a sport dominated for decades by Germany, the U.S. just might have carved out a new niche.

“To be coming into this new role and to have a partner that I respect so much on the sled and that I can trust is, I don’t know, I think it’s something really special to have the two of us on the sled together,” Britcher said.