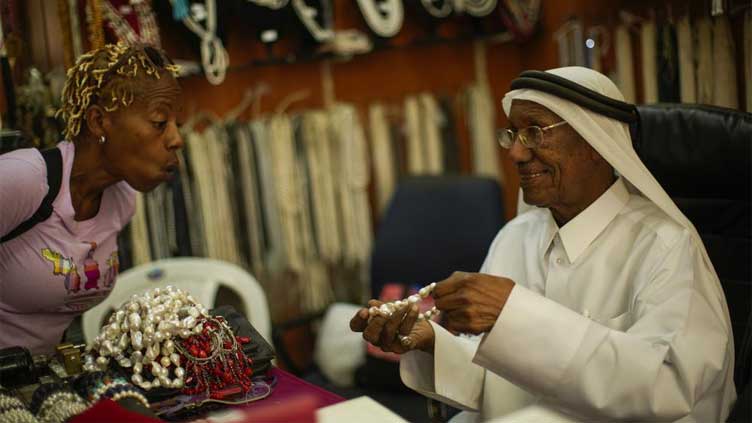 DOHA, Qatar (AP) — Seventy years ago, Saad Ismail Al Jassim used to free dive 40 feet (13 meters) deep into the waters of the Persian Gulf, holding his breath to comb the seabed for oysters in the hope of finding a cluster of pearls.

Today, an 1,100-foot (335-meter) yacht that serves as a floating hotel for thousands of soccer fans is docked by the shore where divers on wooden boats once left to hunt for pearls — emblematic of the stunning transformation World Cup host nation Qatar has experienced over the past century.

Like its Gulf Arab neighbors, Qatar’s main commodity before it began exporting oil and natural gas to the world was pearls, the iridescent precious bead formed when an irritant slips into an oyster’s shell.

Al Jassim, now 87, was among the last of the country’s professional pearl divers. “Our journey would take three to four months,” he said. “We (would) eat, drink, sleep only on the boat.”

For centuries, pearls have been used in jewelry and none were considered as fine as the natural ones found in the Gulf, according to author Michael Quinten Morton, who has written eight books on Middle Eastern history, including “Masters of the Pearl: A History of Qatar.” At the start of the 20th century, Qatar was at the heart of a booming pearl diving industry.

According to Morton, traders in Qatar worked to satisfy Europe’s demand, shipping the gemstones from local markets to Bombay and onward to Baghdad, London or Paris.

Hunting for the glistening beads was dangerous work that kept fishermen, including many who were enslaved, at sea for months at a time. Divers would tie a stone weight to one foot and descend 45 feet (14 meters), often clipping their nose to hold their breath underwater. Fisherman pried open and sorted the oysters back on the boat.

When divers rose to the surface too fast, they risked decompression sickness, also known as the bends, where the wrong gases build up in the blood. Then there were attacks by sharks or other animals. Or drowning.

“Many had hearing problems. Others had vision problems,” said John Duke Anthony, founder of the National Council on U.S.-Arab Relations and an expert on the Gulf nations. “Not a pretty sight, but they did what they did and they supported their families.”

In the early 1900s, Japanese businessman Kokichi Mikimoto perfected a process to make “cultured” pearls by implanting an irritant into an oyster, which stimulates the secretion process that creates the hard stone in nature. By World War II, artificial pearls had taken over the market.

One-tenth the cost of natural pearls, according to Morton, cultured pearls quickly destroyed Qatar’s pearl-diving industry. The sparsely populated British protectorate was one of the poorest in the Arab world. By 1944, only 6,000 workers remained in the Gulf’s pearl trade, compared to 60,000 two decades earlier, Morton wrote.

Within decades, another commodity transformed the country: oil. British geologists in 1939 drilled for and discovered oil in the Dukhan field in western Qatar. A decade later, the country began exporting petroleum. In 1971, Qatar both won independence from Britain and discovered a vast offshore natural gas field it shares with Iran. The country started exporting natural gas in 1997.

It would never be the same. What were once barren stretches of dust and sand turned into towers of glass and steel, artificial islands and shopping malls, with some of the world’s biggest brands. Today, tourists take in Doha’s skyline on dhows, the traditional wooden boats used by pearl divers — a nod to when the kingdom was a collection of poor fishing and herding tribes led by the Al Thani family, the same one ruling Qatar today.

But little else remains from that era.

Al Jassim runs a small pearl shop in Doha’s Souq Waqif, a labyrinthine market. A large black and white portrait of him as a bodybuilder hangs on the wall. The natural pearls he began hunting for at 18, and that his father did before him, are rare today.

“Now, nobody is selling the natural pearl,” Al Jassim said. “Those who have them are keeping it.”

Visitors often ask Al Jassim about his pearling days, prompted perhaps by a sign on the shop entrance that reads “the old pearl diver” below his name. But he shrugs off the change he’s seen in Qatar in his life.

“Any country will change over such a long time,” Al Jassim said. “Even yours.”