Part of me leaves with Federer, says emotional Nadal 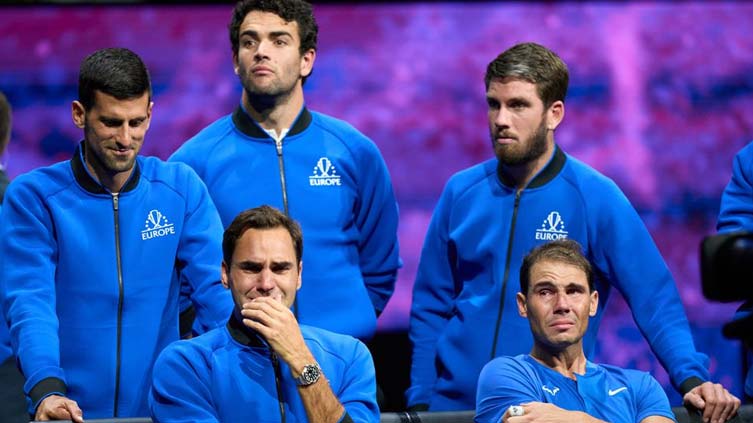 Part of me leaves with Federer, says emotional Nadal

Part of me leaves with Federer, says emotional Nadal.

LONDON (Reuters) - Sitting courtside Rafa Nadal cried as his great rival, Roger Federer, bid an emotional farewell to tennis at the Laver Cup on Friday, later saying an important part of him was also leaving the men’s Tour with the retirement of the Swiss.

Pictures and videos of Federer and Nadal - who shared one of tennis’s most enthralling rivalries - crying together after combining for Team Europe in a doubles defeat at London’s O2 Arena went viral on social media, leaving their legions of fans highly emotional.

Nadal, who has won a men’s record 22 Grand Slam singles titles, said it was a difficult night for him emotionally as the defeat to the American pair of Jack Sock and Frances Tiafoe marked the end of the 41-year-old Federer’s dazzling career.

"For me, has been huge honour to be a part of this amazing moment of the history of our sport, and at the same time a lot of years sharing a lot of things together," the Spaniard said of Federer.

"When Roger leaves the tour, yeah, an important part of my life is leaving too because all the moments he has been next or in front me in important moments of my life. So has been emotional (to) see the family, see all the people. Yeah, difficult to describe. But, yeah, amazing moment."

Federer, who won 20 major singles titles, played Nadal 40 times in one of the most compelling rivalries across any sport.

Despite the ferocity on court, they have remained friends off court. It was perhaps most apt that the Swiss chose to have his final dance with Nadal on his side of the net.

Loud cheers accompanied Federer and Nadal, or "Fedal" as they are jointly nicknamed, on to court. After entertaining the sellout crowd during the match, both were overcome by emotions.

"I think every year the personal relationship gets better and better, on a daily basis," Nadal, 36, told reporters. "I think in some way we understand at the end we have a lot of things similar. We approach the life probably similar.

"On court we have completely opposite styles, and that’s what probably makes our matches and our rivalry probably one of the biggest and most interesting.

"Very proud to be part of his career in some way. But even happier to finish our career like friends after everything we shared on court like rivals."