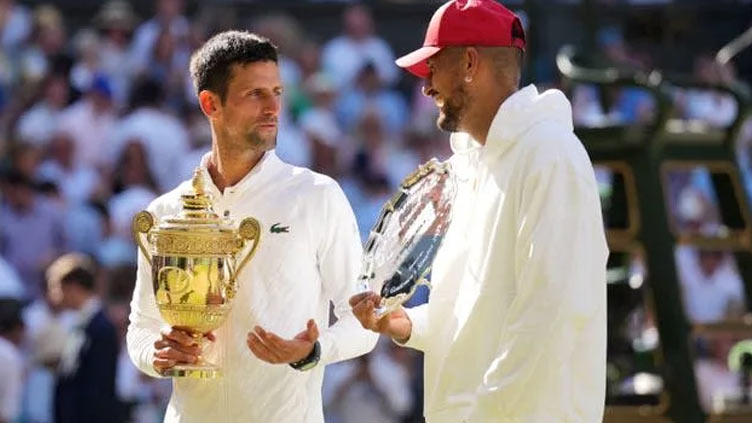 LONDON (AFP) - Top 20 quotes from the 2022 Wimbledon tournament, which ended at the All England Club on Sunday:

"I did definitely feel support and love from the crowd, so I’m very grateful for that."

-- Novak Djokovic on winning over Centre Court on his way to a seventh title.

"I just felt so much pressure. There’s so much anxiety to do things or achieve things. So I feel unbelievable. Like I’m two beers deep."

-- Beaten finalist Nick Kyrgios happy that his Wimbledon is over.

"It doesn’t make sense to go (on), even if I try through my career to keep going. If I keep going the injury will be worse and worse."

-- Rafael Nadal after withdrawing from his semi-final with an abdominal injury.

"They managed to find some Percy Pigs somewhere along the line in the crowd, which he got down and then started to feel better."

-- Britain’s Jodie Burrage on coming to the aid of a ballboy who fainted during her first-round match with Lesia Tsurenko with sweets.

"Novak is kind of a brick wall."

-- Australia’s Thanasi Kokkinakis on facing Djokovic in the second round.

"I feel it’s stupid when someone says sport is out of politics. It’s really stupid."

-- Ukraine’s Marta Kostyuk hitting back at opponents of Wimbledon’s ban on Russian and Belarusian players.

"Have you ever gone into a supermarket and just started berating someone scanning the groceries? No. So why do they do it when I’m at Wimbledon? Why is that?"

-- Kyrgios on the abuse he receives from fans.

"At the end of the day if you have got a bit of a cold, you play main draw of Wimbledon for 50,000 and a chance at more. I’m not sure some of the lower-ranked guys are going to Scout’s honour take themselves away and do a Covid test."

-- Britain’s Liam Broady on the coronavirus testing policy at Wimbledon

"My mum is famous on the tour. I feel like when I’m playing a match, she’s on the screen more than I am."

"They call it a golfer’s elbow -- I got it while playing tennis."

"Tunisians came up with that I think one or two years ago. Funny because a minister in Tunisia comes like, ‘Hello, Minister’. It was funny, but it’s nice to be called that."

-- Ons Jabeur on her nickname, "Minister of Happiness"

"It’s constant bullying, that’s what he does. He bullies the opponents. He was probably a bully at school himself. He also has a very evil side."

-- Stefanos Tsitsipas hits out at Kyrgios after their bitter third-round clash.

"He’s like, ‘Ajla, hungry rats swim the fastest’, whatever that means. I’m like, ‘well, I’m not a rat and I’m not hungry’. I just want my house from the beginning till the end, or maybe you should just believe in me a little more."

-- Ajla Tomljanovic after her father Ratko had only booked their Wimbledon accommodation until the first Friday. On the Saturday, the Australian reached the fourth round.

"I hope I can come back one more time. I’ve missed it here."

"We don’t have a clear view of what is considered to be a perfect champion."

"My agent had to come to force me out of a pub at 4:00 am to play Nadal second round, on Centre Court, Wimbledon. I’ve come a long way, that’s for sure."

-- Kyrgios on his unorthodox preparations before facing Rafael Nadal at Wimbledon in 2019.

"I’m in the semi-final of Wimbledon, it’s crazy, but I’m still a mum. After this I will go out over there and I will see my kids and I will do the same thing I do every single day. I will change her Pampers (nappies), I mean, everything normal."

-- Cameron Norrie on being told that "Henman Hill’"/"Murray Mount", the spectator viewing area at the tournament, should be renamed "Norrie Knoll".