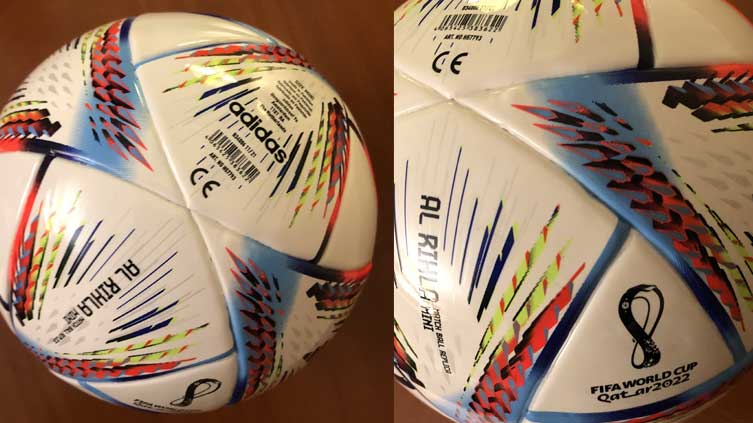 FIFA World Cup is set to commence in Doha, Qatar on 21st November.

LAHORE (Web Desk) - The official match football for the upcoming FIFA World Cup has been produced in Pakistan, making it the country’s significant contribution to the mega soccer event.

The ball named "Al-Rihla" has been unveiled by sports company, Adidas. Al-Rihal is an Arabic word that translates to ‘the journey. The ball has been made in Pakistan by Adidas, the second largest sports manufacturer in the world. The official match ball incorporates the culture of Qatar boats, the flag, and the architecture of Qatar.

The ball was unveiled by World Cup winners Iker Casillas and Kaka in a glittering ceremony in Doha, Qatar.

FIFA World Cup is set to commence in Doha, Qatar on 21st November. Meanwhile, Pakistan itself is not participating in the tournament despite having a team and a following for the sports in the country.

Meanwhile, Sialkot Chamber of Commerce and Industry’s senior vice-president Sheikh Zohaib Rafique Sethi has confirmed in a statement that Pakistan’s ball "Al-Rihla" will be used in the 2022 edition of the FIFA World Cup.

He further said that famous company of Sialkot  Forward Sports  has made the football for the tournament.