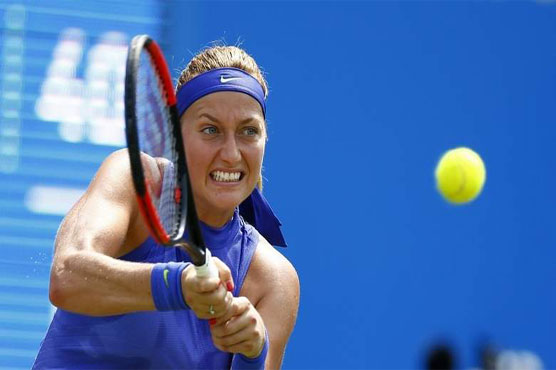 BIRMINGHAM (AFP) - Two-time Wimbledon champion Petra Kvitova was cheered as if she had been the home player, after a straight-sets win over Britain s Naomi Broady in Birmingham on Wednesday carried her into a first quarter-final in eight months.

The applause was not intended as any slight to Broady, but as acknowledgement of an encouraging performance by the Czech, whose career may still be at risk from the injuries inflicted on her by an intruder with a knife six months ago.

Kvitova did serve a few double faults which briefly seemed worrying, but hit some fine ground strokes and moved better than she used to in a 6-2, 6-2 victory.

She seemed taken aback when asked after the match if she knew that she was widely considered as one of the favourites for the tournament.

"I didn t hear that," she said. "I don t really care - it s too early," she added, mindful of this being only her fourth match since the trauma of having five fingers and two tendons of her left hand damaged.

"I am here to play tennis and to play on the grass which I love."

Next up could be Kristina Mladenovic, the fifth-seeded French player, who caused a stir at Roland Garros two weeks ago by eliminating the defending champion Garbine Muguruza.

But Kvitova will have to wait, and make the best of another practice day on Thursday while Mladenovic plays her second round against Zhang Shuai, the world number 31 from China.

She may find that she is fresher than anyone, as her match lasted little more than an hour on a day which was reportedly the hottest in the United Kingdom since 1976, with temperatures in the mid-30s.

Ability to withstand such heat may have been a factor in the two-hour, 20-minute victory for the ninth-seeded Australian, Daria Gavrilova, 7-5, 2-6, 6-4 against Katerina Siniakova, a rising young Czech who already has two wins over top-10 players this year.

Another win each and Gavrilova and Kvitova would meet in Saturday s semi-finals.

Later another Aussie, the 21-year-old Ashleigh Barty, also prospered in the high temperatures.

In her first appearance in the main draw she overcame Barbora Strycova, the eighth-seeded Czech who has twice been a finalist here, 6-3, 3-6, 6-1.

Her reward is likely to be a quarter-final with Ukrainian top seed Elina Svitolina.