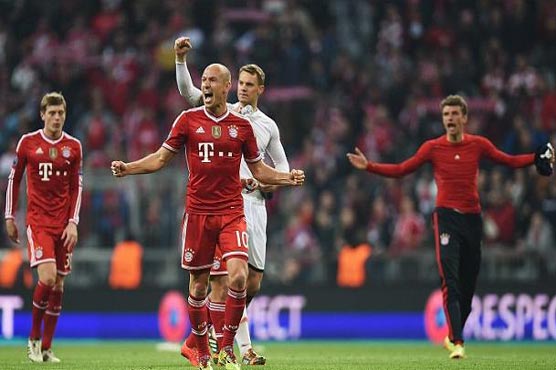 Bayern Munich romped into the Champions League semi-finals with a 3-1 win over Manchester United.

MUNICH (AFP) - Holders Bayern Munich romped into the Champions League semi-finals with a 3-1 victory at home to Manchester United in Wednesday's quarter-final, second-leg to win 4-2 on aggregate.

Having drawn 1-1 at Old Trafford in last week's first-leg, Bayern had to come from behind after United's left-back Patrice Evra put the guests ahead with a superb second-half strike at Munich's Allianz Arena.

But Bayern equalised just 69 seconds later through a diving Mario Mandzukic header, the first of their three goals in the final half an hour.

Thomas Mueller then tapped Bayern into the lead before Arjen Robben slotted the hosts third to knock David Moyes' United out of the competition.

"I thought the players did a great job tonight, the only crime was that we let them equalise just a few seconds later," said Moyes.

"We contained them for long periods of time, but it wasn't to be."

Defensive midfielder Michael Carrick said the United squad were deveastated to have thrown away the lead in Munich.

"We put ourselves in a great position after getting the opening goal - but the equaliser straight after was a big blow for us.

"I thought we might go on to score again, but in the end it's a defeat and one we'll have to take."

Bayern join Atletico Madrid, Real Madrid and Chelsea in the final four with the Bavarians eager to defend their title in the May 24 final in Lisbon.

"The first ten minutes after the break were a catastrophe for us as they took the lead," said Robben with Bayern on the verge of their fourth Champions League final in five years.

"It was important that we got the equaliser quickly, now we have just one more opponent before the Lisbon final."

The first-half was a tense, tactical affair with Bayern failing to exploit their customary 70 percent possession as United packing their defence, forced the Germans to attack through the middle with little success.

Just as they had in the first-leg, United gave a masterclass in how to defend against Bayern's star-studded attack with their deep-lying defence quickly closing down any spaces the Germans managed to open up and tightly marking Bayern's stars.

The ten first-half chances Bayern created in peppering the United goal to the single Manchester effort -- when Luis Valencia had a goal disallowed -- told it's own tale.

United looked to have taken a first-half lead when Valencia converted Wayne Rooney's cross at the back post, but the effort was ruled offside.

Robben was United's chief tormentor in the first 45 minutes and he threatened with a probing run into the area before his final shot was charged down just before the half-time whistle.

United put the Bayern defence under pressure after the break and they were rewarded when Evra gave the guests the lead with a thunderbolt of a shot which gave Bayern goalkeeper Manuel Neuer no chance as it hit the top right-hand corner on 57 minutes.

The lead lasted just under two minutes as Ribery was released on the left wing and his cross was met by Mandzukic who beat Evra to the diving header.

The relief from the Bayern squad was palpable as the Croatia international unleashed a primal scream after his equaliser.

The goals breathed life into the match as space suddenly opened up for both teams to attack.

United had their chances after when England striker Rooney, who played despite the effects of a badly bruised toe, mistimed his shot with just Neuer to beat.

Germany's Mueller then put the defending champions in the last four when he flicked Robben's cross past United goalkeeper David de Gea on 68 minutes.

And the hosts turned the screw on United when Robben was finally rewarded with a 76th-minute goal which he had threatened to produce all night.

The Dutch winger cut across the United defence, then buried his shot past the diving De Gea into the bottom left-hand corner to complete Bayern's fight-back.