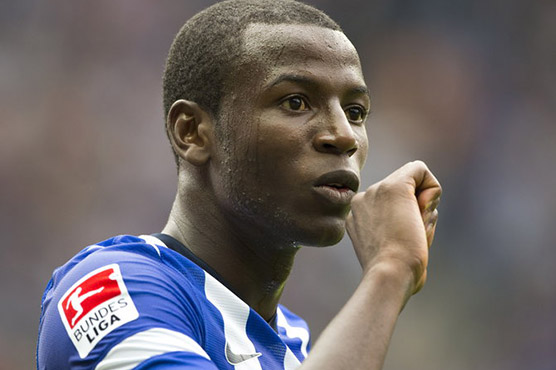 The 28-year-old Ramos, signed a four-year deal that will run through until June 2018.

The 28-year-old Ramos, capped 23 times by Colombia, signed a four-year deal that will run through until June 2018.

"Adrian Ramos is an excellent player and one of the best goal-scorers in Germany. He corresponds perfectly to Borussia Dortmund s demands," said Michael Zorc, the club s sporting director.

The signing of Ramos will go some way towards making up for the departure of prolific Polish striker Lewandowski to Bayern.

Ramos has this season scored 16 goals for Hertha, one less than Lewandowski, who is currently top scorer in the Bundesliga alongside Bayern s Mario Mandzukic.

"I wanted to cross this new step in my career and play in the Champions League," Ramos said, adding that he would "do everything to help Hertha until the end of the season".

With five games remaining, Borussia are currently in second place in the Bundesliga and almost certain to play in next season s Champions League.

Hertha lie in 10th and are virtually guaranteed to remain in Germany s top division after promotion last season.