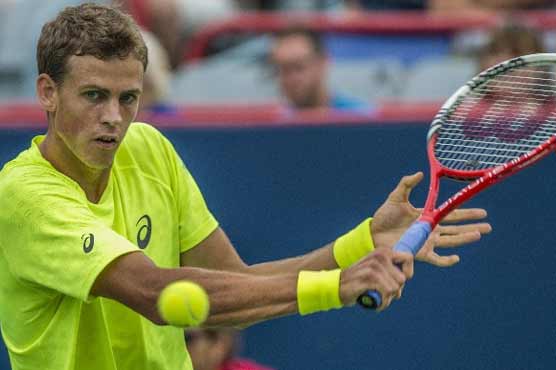 Vasek Pospisil beat Lleyton Hewitt 7-6 (6), 6-4 in the first round of the Erste Bank Open.

VIENNA (AP) - Vasek Pospisil saved two set points before beating former No. 1 Lleyton Hewitt 7-6 (6), 6-4 in the first round of the Erste Bank Open on Tuesday.

Pospisil trailed the now 53rd-ranked Australian 6-4 in the tiebreaker before reeling off four straight points to take the opening set. An early break in the second proved enough for the seventh-seeded Canadian.

"It s very special for me to beat a former No. 1," said the 23-year-old Pospisil, who won just two games in his only previous match against Hewitt at Newport last year. "I ve come a long way since. I started working with another coach and I ve put in a lot of hard work."

Pospisil next plays Robin Haase. The Dutchman, who won both of his career titles in Austria, rallied to beat Ilija Bozoljac of Serbia 5-7, 6-2, 6-2.

Also, the son of 1988 Olympic champion Miloslav Mecir stunned Pablo Andujar of Spain 6-4, 6-4 in his first ever main draw match. The 25-year-old Miloslav Mecir Jr. of Slovakia, who is ranked 240th and came through three qualifying rounds, served nine aces and never faced a break point.

Earlier, Daniel Brands of Germany beat Andreas Haider-Maurer 6-4, 7-6 (5) despite the Austrian serving 16 aces. The 57th-ranked Brands managed one break in the opening set against the 2010 finalist and held serve throughout to set up a second-round match against top-seeded former champion Jo-Wilfried Tsonga.

Dominic Thiem, playing in only his second ATP event this year, defeated Daniel Gimeno-Traver of Spain 6-4, 5-7, 6-4. The 20-year-old Austrian reached the second round for a third straight year and will play either sixth-seeded Gael Monfils or Marinko Matosevic of Australia.

Also, Michael Russell of the United States failed to convert any of his 13 break points in a 6-3, 6-4 loss to qualifier Mirza Basic of Bosnia-Herzegovina; Ruben Bemelmans of Belgium had 10 aces while beating Jan Hajek of Czech Republic 6-2, 6-0; and Slovakia s Lukas Lacko defeated Austria s Gerald Melzer, brother of former two-time champion Jurgen, 7-6 (5), 6-1.