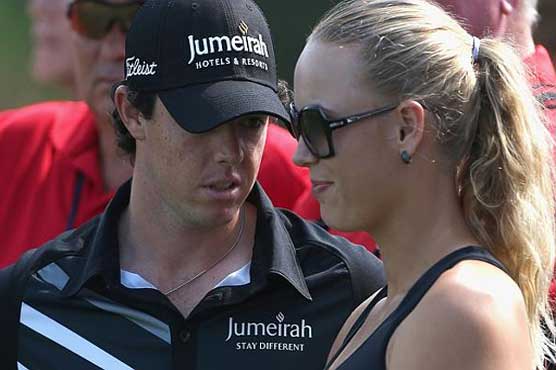 McIlroy is the star attraction at the OneAsia Tour's $1 million Kolon Korea Open.

SEOUL (AFP) - Former world number one Rory McIlroy was tight-lipped Tuesday about reports he has split from long-term partner Caroline Wozniacki and said he was looking forward to getting back on the golf course.

McIlroy is the star attraction at the OneAsia Tour's $1 million Kolon Korea Open which begins on Thursday, the Northern Irishman's first taste of competitive golf after a month-long break.

But speculation is swirling over his private life, with several media reports in Britain saying his high-profile relationship with the Danish tennis star Wozniacki is over.

"My private life is private, I'd like to keep it that way," the 24-year-old said at a press conference at Woo Jeong Hills Country Club, just outside Seoul.

McIlroy will travel on from South Korea next week to play the big-money BMW Masters and WGC-HSBC tournaments in Shanghai with a lucrative exhibition match against Tiger Woods, at Mission Hills in Hainan, China, squeezed in between.

He lies down in 60th in the European Tour standings and cannot afford to drop even one place lower if he is to qualify for the season-ending Dubai World Tour Championship, where he is defending champion.

"I've had four weeks off and it's nice to get back into some tournament play. It'd be good to start this week with a good performance. Obviously, it'd be great to win," said McIlroy, who won the 2012 money lists on both sides of the Atlantic but has seen his form dive in 2013.

His struggles this year have been well documented and McIlroy admits that given a chance to wind back the clock he might have done things differently.

"I've definitely learned a lot this year. If I had to do it all over again, I'd probably have played more at the start of this year, just to play my way into the season a little better," said the double major winner, who has dropped to sixth in the world rankings.

"This is the first year that I struggled as a pro. It's the first year I didn't live up to my expectations. Coming off the back of such a good year 2012, it's always tough to emulate that."

McIlroy admitted that his main focus now was on trying to build some confidence and form for next year.

"I've still got six tournaments left this year to finish the year strongly and get some momentum for 2014," he said.

But he was quick to dismiss the widely held view that switching his clubs to Nike had been the root of his on-course problems.

"I got into a couple of bad habits. You don't play the way you want to, you get your confidence knocked out. Golf is a game of confidence.

"It definitely had nothing to do with equipment. It had more to do with how I swing."