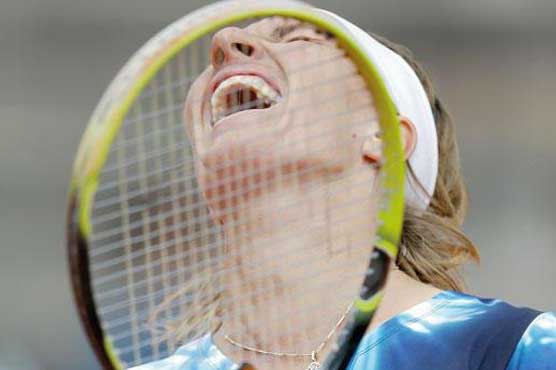 Svetlana Kuznetsova advanced to the second round of Kremlin Cup by beating Lesia Tsurenko 7-5, 6-2.

MOSCOW (AP) - Svetlana Kuznetsova advanced to the second round of the Kremlin Cup by beating Lesia Tsurenko 7-5, 6-2 Monday.

The eighth-seeded Kuznetsova, a two-time Grand Slam champion from Russia, won five consecutive games in the second set and served for the match at love.

"I haven t been playing at the Kremlin Cup for a couple of years," Kuznetsova said. "But this year I really want to play my best here and that s why I was so nervous at the beginning of the match. And I feel myself much better than a year ago when I really tired of tennis after being on the circuit for 12 years."

Kuznetsova is looking for her 14th career title. She last won in San Diego in 2010. Her best result in Moscow was a semifinal appearance in 2007.

Stakhovsky won seven consecutive games to rally from 4-1 down in the first set and take a 2-0 lead in the second. He broke Sousa again in the ninth game, sealing the win with a drop shot on his second match point.

"I started a bit nervous and experienced certain problems in the beginning," Stakhovsky said. "But later in the first set I managed to bring my concentration back and dominated the play for the rest of the match."

Cornet broke in the 12th game of the first set and took a 4-0 lead in the second.

"I didn t expect to play this level today because I just came back from injury," Cornet said. "But surprisingly I played really good today. I think I was really solid especially in the most important moments and that s why I won."

The 27-year-old Ukrainian -- who gained his biggest ever scalp at Wimbledon this year when he beat Roger Federer for his first ever win over a player ranked in the top 10 -- beat 24-year-old Sousa 6-4, 6-3 in one hour 17 minutes.

Sousa, ranked 50th in the world in comparison to his opponent s 98th, started the tie confidently, taking a 4-1 lead with a break in the fourth game.

However Stakhovsky, who won the last of his four ATP titles in 2010, was unfazed and stormed back to break Sousa twice and rattle off five consecutive games to win the first set in 37 minutes.

In the second Stakhovsky underlined his supremacy when he broke Sousa, who in September became the first player from Portugal to win an ATP title when he won the Malaysian Open, twice again in the second set to clinch the match.

"I was a bit nervous to start with and experienced problems at the beginning," Stakhovsky said.

"But later in the first set I managed to regain ny concentration and dominated the rest of the match."

The 29-year-old Roger-Vasselin looked more focused from the start breaking his rival s serve twice to take the first set in 32 minutes.

They traded breaks throughout the second set as it went to a tie-break which 20-year-old Vesely won to tie the match.

Roger-Vasselin came up with the decisive break in the eighth game of the third set and won the match in 2 hours 16 minutes.