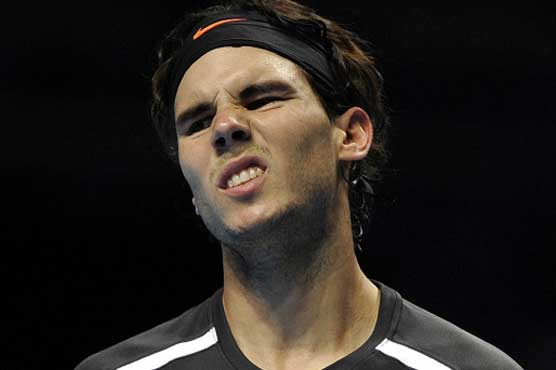 SHANGHAI (AP) - Rafael Nadal lost his first match since reclaiming the No. 1 ranking this week, falling to a resurgent Juan Martin del Potro 6-2, 6-4 in the Shanghai Masters semifinals on Saturday.

The fifth-ranked del Potro will try to win his first Masters title on Sunday against top-seeded Novak Djokovic, who defeated Jo-Wilfried Tsonga in the other semifinal 6-2, 7-5.

Del Potro hadn t beaten Nadal since the semifinals of the 2009 U.S. Open where the Argentine went on to win his only Grand Slam title.

But del Potro is playing fully fit and with confidence he s coming off a win last week at the Japan Open that returned him to the top five in the rankings for the first time in three years.

He completely overpowered Nadal with his deep, punishing groundstrokes and fended off all six break points he faced.

Nadal s serve, on the other hand, was under threat for the entire match. After not dropping serve in 28 games this week, the Spaniard was broken twice to start the match as del Potro raced out to 4-0.

Del Potro started to make a few mistakes in the second set, giving Nadal two chances to break in the second game. But the Argentine saved both with huge serves and put the pressure right back on Nadal, breaking him for a third time in the following game.

"I played so solid all the time, hitting so hard the ball. I saw Rafa playing very far off the baseline, which is good for my game, for my serve and confidence. That s the way to beat this guy," del Potro said.

Nadal said he hadn t seen del Potro play this well in years. Or anyone, for that matter.

The big-hitting Argentine, who wrapped up a spot in the ATP Finals in London with the win, has been working his way back into top form since a wrist injury knocked him off the tour for most of 2010 just after he got his breakthrough win as a 20-year-old at the U.S. Open.

Now he believes he can challenge Djokovic, Nadal and Andy Murray for major titles again, as his run to the semifinals of Wimbledon this year showed. He lost a tight, five-setter to Djokovic in that match, but he had beaten the Serb a few months earlier at Indian Wells.

Djokovic, meanwhile, will be trying to win his 20th straight match and fourth straight tournament in China on Sunday. He won the China Open and the Shanghai Masters in 2012, and then successfully defended his title in Beijing last week, beating Nadal in the final.

"I ve always been coming out in China and making some really, really good results, winning trophies," Djokovic said. "It s very positive because most of the people would think after the fourth Grand Slam of the year is over, that somehow the season is finished in the minds of maybe people who are not following consistently the tennis season."

Djokovic raced to 3-0 after only seven minutes against Tsonga, who came out looking flat and misfiring wildly at times on his groundstrokes and volleys.

However, Djokovic then lost his temper in the second set when serving at 4-2, yelling angrily at chair umpire Ali Nili after two disputed calls. Tsonga twice challenged late calls that went against him - and both times the Hawk-Eye camera replay showed the balls had clipped the line.

The umpire awarded both points to Tsonga, prompting a furious reaction from Djokovic who thought the points should have been replayed.

"Twice I was on the ball, twice you take the point away from me," Djokovic yelled. "Focus!"

Tsonga managed to break the rattled Serb to get back on serve at 4-3, but his comeback was short-lived as another error-strewn game allowed Djokovic to break him at 6-5 to close out the match.

"When you re on the tennis court, it feels like an arena," Djokovic said about his outburst. "You re fighting. It s emotional. It s intense. It s normal. It s not the first nor the last time."