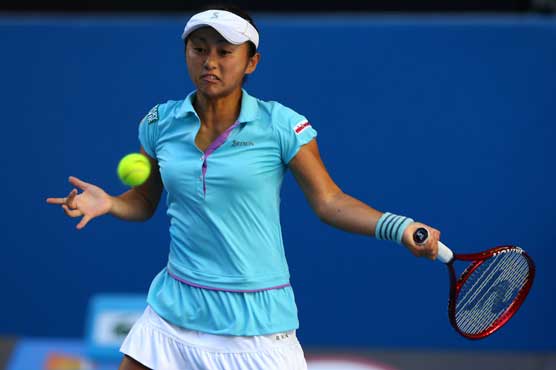 The 22-year-old Doi is currently ranked 75th in the world.

The 22-year-old Doi, currently ranked a career-high 75th in the world, earned the lone service break of the second set in the ninth game, then served out the match to set up a quarter-final clash with number three seed Samantha Stosur of Australia.

In the first set, the two traded service breaks to start the second-round match, then again to make it 5-5. In the tiebreaker, Doi won four straight points to go up 5-1 before closing it out 7-3.

In other second-round matches at the Utsubo Tennis Center, sixth-seeded teenager Madison Keys of the United States continued her quest for a first WTA title by rolling to a 6-4, 6-0 victory in 51 minutes over China's Zhang Shuai.

Keys will next face another Chinese opponent, Zheng Jie, who stormed back from a first-set loss to oust ninth-seeded Kristina Mladenovic of France 6-7 (5-7),6-2, 6-0.

Doi, who lost to the 43-year-old Date-Krumm in their first two career encounters, defeated the world No. 54 on September 28 in the qualifying round for the China Open. Doi was leading 7-6 (7-5), 4-2 when Date-Krumm retired, saying later on her blog she was suffering from headaches caused by the Beijing smog.

In the other quarter-finals, number five seed Eugenie Bouchard of Canada will face Czech qualifier Barbora Zahlavova Strycova, while Japanese wild card Kurumi Nara will take on Slovenia's Polona Hercog. The matches are to be played Friday.