The Junoon Rumors: Reconciliation around the corner? 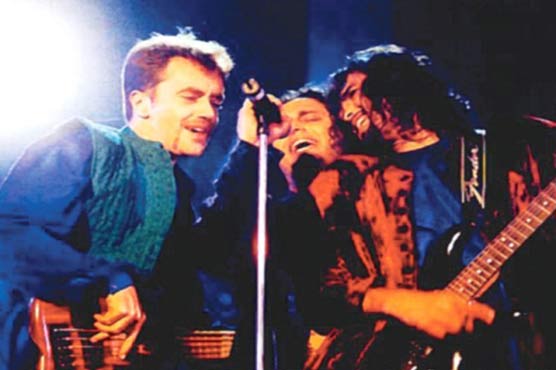 Speculative babble broke out amongst music enthusiasts and analysts when former lead-singer of the popular Pakistani band Junoon, Ali Azmat, and the lyricist and producer Salman Ahmed used social media platforms to hint that there might be a possible reconciliation.

Both artists were seen mocking each other affectionately on Twitter, after Ali Azmat posted his reaction on Salman Ahmed’s new and somewhat unsuccessful single, expressing his disbelief that Salman Ahmed could create such flimsy lyrical content.

The band members have been in an open rivalry on television, print and social media after the band’s break-up in 2005, after which Ali Azmat went on to pursue a solo career and later that year released his first solo album ‘The Social Circus’.

In an interview in 2008 for an entertainment channel’s talk-show, Ali Azmat opened up about the circumstances of the break-up of the band; he accused Salman Ahmed of ‘bigotry’ and a ‘controlling demeanor’. It was also speculated that the miscommunication between the band members might have been due to the fact that the three of them resided at different locations around the world.

Junoon has been one of the most popular musical groups in South-Asia through the 90’s and early 2000’s. The band was formed in 1989, after Salman Ahmed walked out on the Vital Signs, another tremendously popular band of the era and one of the fundamental contributors to pop culture in Pakistan. After the tie-up of Salman and Azmat, Brian’O’Connell was called on board from the United States to take up the band’s lead bass in 1990.

In the face of brutal hostility shown by the dominant religious community of the time towards the performing arts, Junoon went down-wind and introduced rock music to the Pakistani music spectrum, which was previously unheard of. They adapted a political and social satire in their lyrical content, which led to their first run-in with the authorities. In a music-video titled ‘Ihtisaab’ (Accountability), the band highlighted corruption and discrepancies amongst the political circles. There was a graphic depiction of the former Prime Minister Benazir Bhutto, which received strong reactions from the establishment and Junoon’s music was banned from State television in 1995. The same year, Junoon was named the ‘U2 of South-Asia’ because of their raging popularity and rebellious standing.

Another controversy came in when during a tense stand-off between India and Pakistan, following Pakistan’s nuclear test declaration, Junoon travelled to India for a series of Musical performances, and issued open statements condemning the nuclear program and the consequences that it might lead to. On these statements and actions, a show-cause notice was issued to Junoon and it was suggested that they be charged with treason.

Junoon kept performing in closed arenas and discreet appearances as part of a ‘musical rebellion’. After the 1999 Coup D’état by the Pakistani army, Junoon’s media ban was lifted and their charges were dropped. This was due to the fact that the military dictator General Pervez Musharraf was in favor of cultural propagation and was an avid supporter of the performing arts.

At a benefit hosted for the September 11 attacks in 2001, Junoon went out to the city of New York to perform and made sympathetic statements, expressing their grief at the tragedy and relaying the sentiments of the Muslim world. At the time, the band faced a lot of criticism and antagonistic behavior from the American media and community because of the budding resentment towards the Muslim world amongst the American public. Junoon also had the distinction of being the first rock-band to ever perform in the United Nation’s Assembly hall, to the sitting ambassadors and global diplomats of the time.

Since their break-up in 2005, there have been multiple interventions by other artists and former alliances to bring the band back together, but their recent twitter tryst has been the only hint of a possible patch-up.