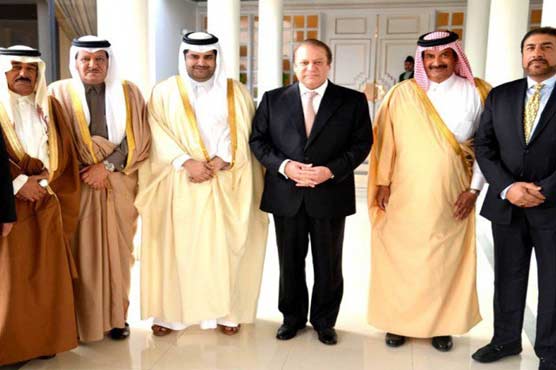 Pakistan, Qatar sign several MOU's including the import of LNG.

ISLAMABAD: Pakistan and Qatar officials have signed several Memorandums of Understanding (MOU) including the import of Liquefied Natural Gas (LNG). Pakistan will import 3.75 million tons of LNG (annually) from Qatar-Gas Company to tackle the gas and power shortages in the country.

During Prime Minister Nawaz Sharif’s visit to Qatar, the Minister for Petroleum and Natural Resources Shahid Khaqan Abbasi signed the agreements to increase co-operation in various fields including energy, trade, defense, investment, education, health, academic research, radio and television. The most prominent aspect of the LNG deal between Qatar and Pakistan is that Qatar will now provide 3 LNG ships each month as compared to the previous deal which ensured the delivery of just 2 LNG ships a month.

Previously, the National Accountability Bureau (NAB) dispatched a preliminary report of satisfaction over the LNG import deal with Qatar. The Ministry of Petroleum gave a briefing to the NAB Chairman regarding the LNG deal which was later on declared as ‘transparent’ and satisfactory by the NAB officials. Mr. Shahid Khaqan Abbasi had requested the NAB Chairman, Qamar Zaman Chaudhry, to look into the Qatar-LNG deal in order to ensure its transparency as the deal became controversial with the claims that the deal is signed at inflated rates. NAB has shown satisfaction over the rates and the procedures, which will follow up to the final agreement between Qatar and Pakistan over the import of LNG.

Moreover, the government had been under pressure from the National Accountability Bureau (NAB) after the LNG scandal that took place prior to the Pakistan-Qatar LNG deal. The government had planned to buy LNG at inflated prices in order to tackle the energy crisis in Pakistan which would have cost Pakistan $5 million per day according to the Pakistan Economy Watch (PEW) officials. According to PEW, the deal would have finalized at $18/per million British thermal units (MMBTU) which would have eventually become $21/MMBTU at the Karachi ports. This deal would have caused a 200 percent increase in gas prices for the end users.

Qatar had offered its LNG at the price of 13.9 percent which was refused by the ECC Chairman and Finance Minister Ishaq Dar. Due to this refusal of LNG prices by the ECC, the Qatar authorities expressed concerns which could have jeopardized the Qatar-Pakistan deal. Surprisingly, the Qatar officials at Qatar-gas Company lowered the prices of LNG from 13.9 percent to 13.37 after the Federal Minister for Petroleum and Natural Resources visited Qatar to discuss the issues concerning the LNG deal.

Furthermore, the secretary petroleum Muhammad Ejaz Chaudhry was fired due to his resistance against the disputed deal. The Oil Gas Regulatory Authority (OGRA) was also put under pressure by the government due to the institution’s disagreement over buying LNG at inflated rates.

The current deal between Pakistan and Qatar is not a ‘slope’ priced deal as under the ‘S’ shaped deal, the price would vary greatly due to the ever-changing economic conditions in the International market.
“The LNG price was not decided in ‘S’ shaped fearing the wrath of NAB,” the minister said.

The National Assembly has been witnessing aggressive debates between the Federal Minister for Petroleum and Natural Resources Shahid Khaqan Abbasi and members of Pakistan Tehreek-e-Insaaf during its sessions on the matter of LNG import and its finalized rates.

The discussion during one of the sessions became violent when Shireen Mazari, member of PTI, blamed the federal government for not being ‘clear’ regarding the price at which LNG is being imported from Qatar-gas Company.

“LNG has been imported from Qatar but the federal government is not willing to tell us the price of its import,” said Mazari.
The heated debate became even more aggressive when Shireen Mazari accused the government for hiding the role of Saif-ur-Rehman, the ex-aide of Prime Minister Nawaz Sharif, behind the apparent ‘urgency’ of the multi-billion dollar LNG deal with Qatar.

“Saif-ur-Rehman has shares in the Qatar-gas Company,” blamed the PTI member.
“Pakistan’s energy future is directly linked to liquefied natural gas” said the Federal Minister. He stressed that LNG is the best solution for Pakistan’s energy crisis due to its cost effectiveness as compared to other available resources.

The first shipment of LNG is expected to reach Pakistani ports by April this year. Pakistan’s LNG requirements will reach up to 4 million tons per annum in 2017.