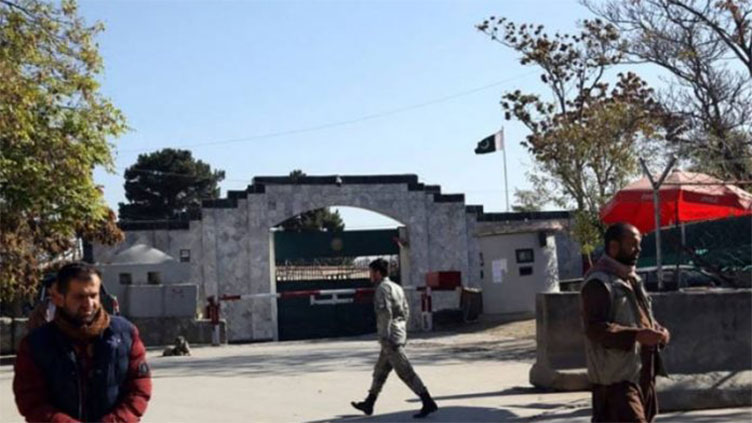 Afghan authorities said security of the Pakistani diplomatic missions had already been beefed up.

ISLAMABAD (Dunya News) - The interim Afghan government on Friday strongly condemned the attack on Pakistan s Head of Mission in Kabul Ubaid Nizamani, assuring that a "serious investigation" would be conducted to bring the perpetrators to justice.

Praying for a speedy recovery of a security guard injured in the attack, he said that their government would not allow any "malicious actors" to pose a threat to the security of diplomatic missions in Kabul.

IEA strongly condemns failed firing attack towards @PakinAfg in Kabul & prays for speedy recovery of a security guard. IEA will not allow any malicious actors to pose a threat to the security of diplomatic missions in Kabul. pic.twitter.com/JRkRnSMugA

"Our security will conduct a serious investigation, identify perpetrators & bring them to justice," the spokesperson assured.

While in Islamabad, Pakistan summoned the Afghan Charge d affaires to Foreign Office to convey its "deep concern and anguish" over the attack in Kabul on Pakistan s Head of Mission.

The United Nations firmly condemned the attack on the Pakistan Embassy in Kabul on Friday that targeted the Head of Mission, Ubaid-ur-Rehman Nizamani, with the hope that the security situation in Afghanistan will improve.

"We re, first of all, thankful that the charge d affaires (Nizamani) of the embassy of Pakistan was unharmed," the UN Secretary-General s Spokesman, Stephane Dujarric, said in reply to a question at the regular noon briefing in New York. "We very much hope the security guard (who was critically injured) recovers."

"But", the spokesman added, "more importantly, we condemn, firmly these types of attacks."

Asked whether the security situation in Afghanistan was deteriorating, Dujarric said, "We have seen in Afghanistan a number of attacks of security challenges. We want the situation to get better and to improve, and we will continue to do what we can in that regard."