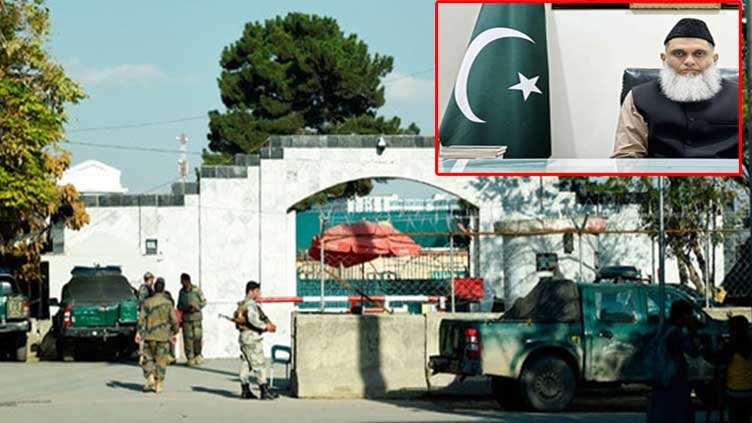 KABUL (Dunya News) – The compound of Embassy of Pakistan in Kabul came under attack on Friday targeting Head of Mission, Ubaid-ur-Rehman Nizamani.

The Foreign Office said Government of Pakistan strongly condemns the assassination attempt against the Head of Mission and the embassy compound in Kabul.

It called upon the interim government of Afghanistan to must immediately hold thorough investigations into this attack, apprehend the culprits, hold them to account and take urgent measures to ensure the safety and security of Pakistani diplomatic personnel and citizens in Afghanistan.

On the other hand, Prime Minister Shehbaz Sharif strongly condemned the assassination attempt on Pakistan’s Head of Mission in Afghanistan’s capital Kabul and ordered immediate inquiry into the incident.

“I strongly condemn dastardly assassination attempt on Head of Mission, Kabul,” he said in a tweet. “I demand immediate investigation and action against perpetrators of this heinous act”.

President Dr Arif Alvi also strongly condemned the attack on the head of Pakistan’s Mission in Kabul Ubaid Nizamani. He thanked Allah Almighty for keeping the envoy safe and prayed for the early recovery of the security guard injured in the attack.

“Attack on diplomatic mission is a matter of concern. I strongly condemn it,” the president said. He said that Pakistan condemned terrorism in all of its forms and manifestation, and was resolved for its elimination.

The president said that terrorism was a common threat that necessitated concerted efforts effectively counter the scourge.

In a Tweet, the Foreign Minister said we condemn this incident in the strongest possible terms. He said that the safety and security of our diplomats are of fundamental importance.

He said we salute bravery of sepoy Israr and pray for his swift recovery.

Minister of State for Foreign Affairs Hina Rabbani Khar in her tweet said that assassination attempt on Pakistan s envoy in Kabul is condemnable.

She said our Ambassador Ubaid Ur Rehman Nizamani has served this relationship well and his safety and security will remain the highest priority for the Government of Pakistan.

She prayed for the early recovery of the injured security guard Israr.