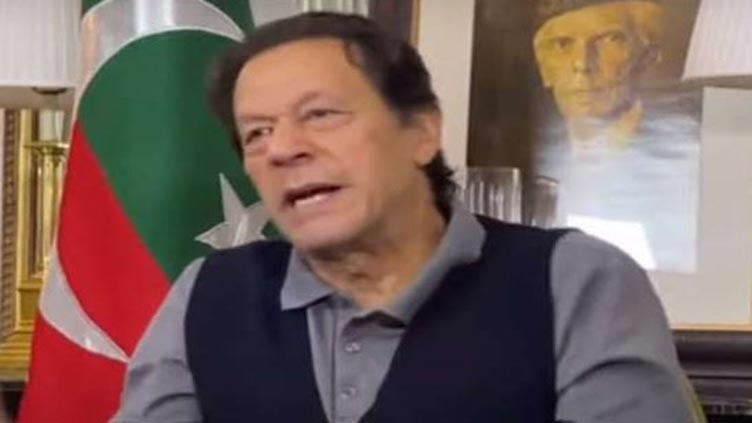 LAHORE (Dunya News) – Pakistan Tehreek-e-Insaf (PTI) Chairman Imran Khan on Friday asked his political rivals to announce the date of the next elections while also inviting them to have a meeting with party leaders.

Speaking to the parliamentary party, the former prime minister lamented the rising unemployment rate while asserting that stability would come with the arrival of the new administration. He reiterated that Pakistan was on the verge of default.

The former premier slammed Federal Minister Ishaq Dar for saying he would deal with Moody s because he had since remained silent on the subject. He took a swipe at the coalition government, accusing it of lacking a plan.

Imran raised his voice in support of the farmers’ community, saying, "In our time, the farmers had finally received benefits. But now that diesel prices have skyrocketed, farmers are worried.”

Speaking on the dissolution of assembly, Mr Khan stated that the PTI leadership made this choice for the good of the nation. He questioned whether the current administration wanted the elections to be held in only 66 per cent of the seats, which are in Punjab and KP.

He asserted that the government intended to have him disqualified or imprison him. Imran berated the rulers, claiming that they had stolen Rs1100 billion through the NAB amendment.

The PTI chairman said the federal government was required to give the Punjab government Rs176billion, but it hasn t done so. He also claimed that the centre hasn t given money to the governments of Balochistan or KP.

Earlier, PTI Chairman Imran Khan has directed his party leaders and social media team to stop criticising the establishment in a major shift in his policy he had been pursuing since his ouster as prime minister in April last.

The development comes a few days after the appointment of top brass.

The former premier advised the social media managers to ensure the implementation of the policy, which apparently aims at mending fences with the establishment.

Meanwhile, PTI leader Fawad Chaudhry said the party was following a policy of not engaging in any confrontation with the institution.

In a tweet, Mr Khan expressed hope that the new military leadership would end the prevailing trust deficit that had been built in the last eight months “between the nation and the State”.

“Strength of the State is derived from its people,” reads the tweet.

On the other hand, the Islamabad High Court (IHC) admitted on Friday the separate appeal of PTI Chairman Imran Khan for early hearing in his disqualification by the Election Commission of Pakistan (ECP) in Toshakhana case.

A four-member bench headed by Chief Election Commissioner (CEC) Sikandar Sultan Raja announced the unanimous decision.
In the decision, it has been said that Imran Khan is no longer a member of the National Assembly, adding that he submitted a false affidavit and has been involved in corrupt practices.