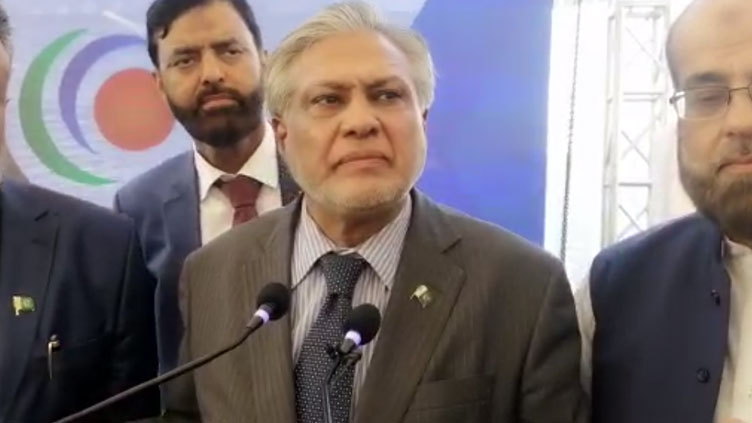 LAHORE (Dunya News) – Minister for Finance Ishaq Dar said on Wednesday while backtracking from his statement of bringing exchange rate of dollar to below Rs200 said that it is the duty of all political parties to bring political stability in the country.

Talking to media in Karachi on Wednesday, he warned that the results wouldn’t be good if there is no political stability in the country. He said that the state should be priority and the reports regarding default are baseless.

Earlier speaking at a seminar, Ishaq Dar said that the country’s economy needs to be stabilised with the Islamic banking system.

The minister while welcoming Sharia Court’s decisions regarding the abolition of interest said that withdrawing appeals against interest was his priority.

Now, he added, once again PML-N led government had started working on fast track to promote Islamic banking and preferred financing through Sukooks. “ Islamic Banking must be our first choice,” he asserted adding that according to the Holy Quraan, adopting interest-based trade and finance system meant to declare war with Allah Alminghty and His belevoved last prophet Hazart Muhammad (Peace Upon Him).

He said that riba-based economy was very destruction for the society as it led to injustice, inequality and frustration.

He informed that as result of his pursuance SBP and National Bank of Pakistan had withdrawn their appeals filed in the Supreme Court of Pakistan against the FSC deadline to fully shift to Islamic finance system.

He expressed his satlisfaction that Islamic banking was getting edge over the conventional banking by having strong base of assets in trillion of rupees.

He was confident that within next five years period set by FSC, the country’s financial system could be coverted into Islamic system. And, that we as a nation should move to ‘Zakat and Ushr’ system.

To a demand by the Ulema, he assured that no conventional bank would be allowed to open a new branch.

Dar said that the government, along with State Bank of Pakistan, was taking all required steps and providing all maximum facilitation to the banks for financial inclusion wherein the people in remote and less developed areas of the country could be easily become a part of the finance system. This would generate many economic activities.