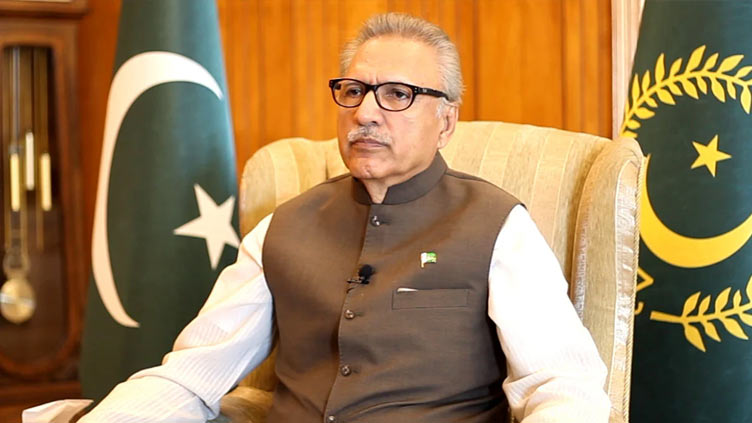 Pakistan has historically supported the legitimate struggle of Palestinians: President

ISLAMABAD (APP) - President Dr Arif Alvi on Tuesday reiterated Pakistan’s unflagging support to the cause of Palestine against the tyranny and illegal occupation of the Israeli forces.

“Pakistan has historically supported the legitimate struggle of Palestinians and shall continue to do so,” the president said in his message on the International Day of Solidarity with the Palestinian People.

President Alvi said collective voice and action could bring peace and security to the Palestinians and expressed hope that justice and fairness would prevail over tyranny and oppression.

He hoped that the conscience of the world would triumph over narrow self-interests.

He stressed that Pakistan fully supported the Palestinian position and their readiness to negotiate a peace accord based upon internationally recognized terms of reference and pre-1967 borders.

The accord, he said, needed to be under international monitoring, holding accountable the parties and within a determined and binding timeframe, with East Jerusalem as the capital of the State of Palestine.

President Alvi pointed out that during the last seven and half decades, there was systematic and increasing abuse of the Palestinians at the hands of Israelis.

“So much of the innocent blood has been shed and the bleeding of Palestinians has not stopped yet. The two undeniable realities of the conflict are unstoppable Israeli violence against Palestinians and the illegal occupation of Palestine by Israel,” he said.

The president said the most recent episode of the incessant Israeli violence was seen in August this year when it’s bombing in Gaza resulted in the deaths of approximately 50 Palestinians including 17 children, and injuries to more than 300.

“Despite any action that Israel takes to annex occupied Palestinian territories, the annexation and occupation will remain in contravention of the principles of international humanitarian law and international law,” he said.

“The struggle of the Palestinians for their freedom will continue until they are given the chance to exercise their right to self-determination and Pakistan will stand by them,” he said.