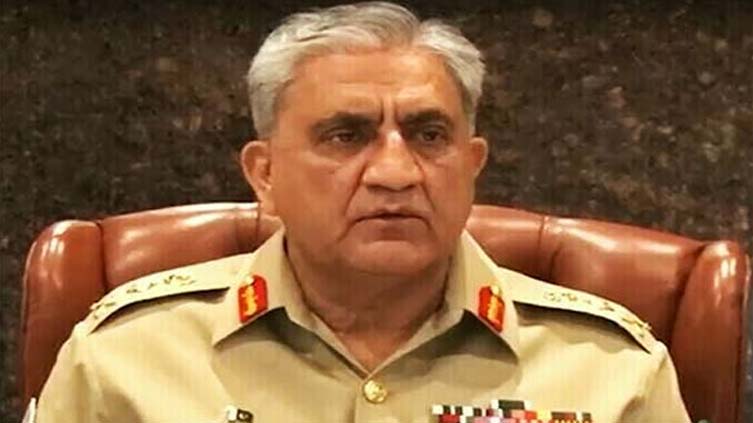 RAWALPINDI (Dunya News) - The outgoing Army Chief General Qamar Javed Bajwa said on Tuesday he is "grateful to Allah" who gave him the opportunity to serve in this "great army" and congratulated Gen Asim, who assumed the charge of new Chief of Army staff (COAS).

While addressing the change of command ceremony at the General Headquarters (GHQ), Gen Qamar Javed Bajwa said, "On every occasion in the six-year tenure, this army always responded to my voice. I am proud of the army which guards borders from Siachen to the deserts despite its scarce resources. It defends the country’s stealth irrespective of language, colour, race and religion."

He added that his association with General Asim is 24 years old, "He is a professional, talented and capable officer of high principles besides being Hafiz-e-Quran," Gen Bajwa said. While he said he has a belief that Pakistan Army will make further progress under Gen Asim s leadership. His appointment will turn out as positive decision. He also expressed his pleasure over handing over his position to a capable person as he expressed his belief on Gen Asim for further serving the nation with commitment. He also said whenever the Pakistan Army will be facing difficult time, his prayers will be with it.

General Bajwa went on to say that he will soon go into oblivion, but his spiritual connection with the army will always be maintained, on army s successes he will be happy and when the army will have a difficult time, he said his prayers will be with it.

Earlier on Tuesday morning, Change of Command ceremony for the chief of army staff took place at GHQ in Rawalpindi, where General Asim Munir assumed command of Pakistan Army.