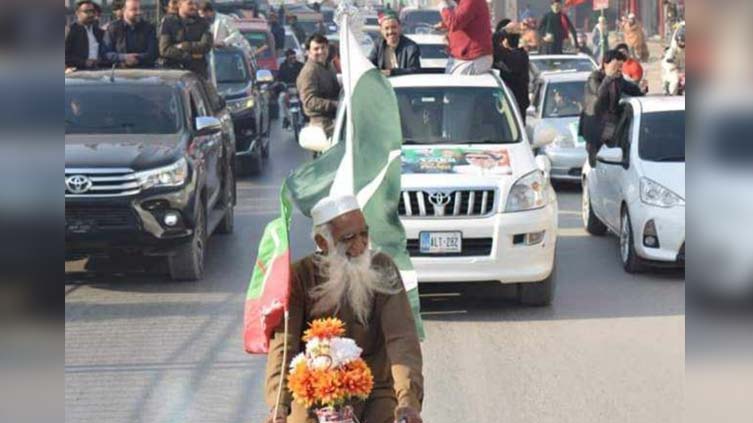 RAWALPINDI (Dunya News) - Soon after Pakistan Tehreek-e-Insaf (PTI) Chairman Imran Khan has left for Rawalpindi from Lahore, a large number of party workers from different parts of the country are travelling to the garrison city of Rawalpindi to resume PTI’s long march as the former prime minister wants to mount pressure on the government for fresh elections.

The PTI chief will rejoin the major rally in his first public appearance since an assassination attempt earlier this month, when he sustained bullet wounds after his long march was attacked near Wazirabad city of Punjab. Since then, he has been addressing the crowds via video link before he halted the “Haqeeqi Azadi” march till November 26.

Earlier, the social media pages of PTI shared various videos on its official Twitter handle, showing convoys moving towards the Rawalpind for jalsa.

A large convoy can been seen leaving Gilgit-Baltistan for the Pindi Jalsa as party supporters are enthusiastic to listen to their leader Imran Khan.

While long lines of cars can be seen coming from other parts of Khyber Pakhtunkhuwa (KP).

Former Federal minister Shehreyar Afridi in a video statement said that rallies from northern Khyber Pakhtunkhwa will converged on motorways at 9:00am, while KP Chief Minister Mahmood Khan will lead the rallies.

As rallies continue to reach the Islamabad’s neighbouring city from the Punjab capital, a convoy of Insaf Youth Wing has arrived in Rawalpindi.

The PTI’s power show in Rawalpindi is expected to reach its peak today merely a day after the key appointments of the Pakistan Army -- the appointment of the Chief of Army Staff (COAS) and the Chairman Joint Chiefs of Staff Committee (CJCSC).

Imran Khan will appear in the public first time after his long march’s container came under gun attack in Wazirabad on November 3. Imran Khan, who suffered bullet wounds along with others, remained under medical treatment at the Shaukat Khanum Memorial Hospital and was later shifted to his Lahore’s Zaman Park residence, will fly to Rawalpindi via chopper around 2pm and will later address “a large number” of party workers.

The PTI chief will be transported to the venue amid tight security as extraordinary arrangements have been made to secure Imran Khan and other leaders keeping in view life threats as feared by interior minister Rana Sanaullah.