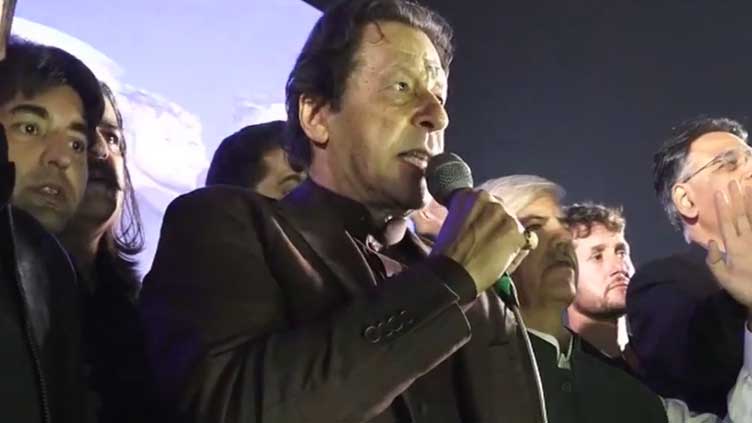 RAWALPINDI (Dunya News) – Pakistan Tehreek-e-Insaf (PTI) Chairman and former prime minister Imran Khan on Saturday announced that his party will resign from all the assemblies, saying that the leadership has decided to not head towards Islamabad.

Addressing the participants of the long march, the former premier [Imran] said that after consulting with the parliamentary party, the date of the ‘exiting’ from the assemblies will be decided as – according to him – he has talked with his Chief Ministers in this regard. He added that the PTI could no longer be a part of the corrupt system.

At the outset of his speech, the PTI chief said that he offers an apology to his supporters of making them to wait for the power show. Many of the PTI’s supporters are stranded on the roads. Talking about the gunfire incident, he said that attempt was made to assassinate him, adding that he had a near-death experience.

Saying that was told that it would take three months for –his – wounds to heal, Imran claimed those who tried to assassinate him are still sitting in the top-level positions, adding that three people were behind his assassination attempt. He claimed that those who called cypher ‘fake’ were involved in the process of toppling his government.

‘No stone left unturned to dishonour me’

Berating the – rulers and allies – of the incumbent government, Imran Khan said that there was no stone left to dishonour me. He added, "I am here today to tell you [PTI’s supporters] that the country is standing on the historic moments.

The former premier said that in the societies where there is no rule of law and justice decline. He claimed that first the rulers of the incumbent government were called ‘thieves’ and then they were given NRO behind closed doors. He told his supporters that fear makes people ‘slaves’.

‘Will fight for country till end’

The PTI Chairman once again vowed to fight for the country’s betterment till the very last moment, while he said that the nation has denounced the – rulers – of the incumbent government in the by-polls

‘I own country, Army’

The PTI chief made it clear that the he owns the country and the Pak Army, saying that Pakistan belongs to him and he never thought of seeking a foreign passport. He added that he feels proud that the Pak Army is powerful.

He said that 75 per cent of the country’s population – according to survey - wants election as merely the political stability could pave way for the economic growth.

Addressing the participants of the long march, the seasoned politician went on to say that the former premier [Imran] is confident that the nation would not disappoint him. He added that the masses are not with the view of accepting the system of injustice.

He lambasted the incumbent government, saying that the rulers are not concerned about the economy, but of ruling, adding that if they [rulers] are thinking that by resorting to the tactics of delaying elections will pave way for Imran Khan’s ‘declining’ popularity, so they [rulers] are on the ‘wrong direction’.

Addressing the participants of the long march, Swati said that for the actual freedom, the PTI’s leadership would continue to extend support to the party’s chairman [Imran Khan]. He questioned that why the FIR is not being registered as per Imran Khan’s will.

He was expressing his thoughts in his address to the participants of the long march, lamenting that in the matter of assassination attempt on Imran Khan, the FIR was not registered as per Imran’s will. Asad stated that historic events are taking place in Pakistan and that the fate of the country would no longer be decided behind closed doors.

Like other PTI leaders, Asad Umar talked about senator Azam Swati and noted journalist Arshad Sharif, saying that appeals of both of them were sidelined, adding that the family of Arshad Sharif is waiting for the ‘deliverance’ of justice.

Happy to be ‘estranged’ if patriotism falls under insurgency: Murad Saeed

PTI leader Murad Saeed expressed his views, saying that the party’s leadership would prefer to remain ‘estranged’ if patriotism falls under insurgency.

Addressing the participants of the long march, Murad took a jibe at the government, accusing the rulers of treason, adding that whoever talks about the justice, subjected to the torture. He stated that the PTI leadership has pledged to fight both internal and external conspiracies.

Our fight not against army, but Shehbaz and Zardari: Shiekh Rashid

Addressing the participants of the long march, Rashid lashed out at the incumbent government over economic situation. Talking about the ouster of Imran’s government, the former federal minister said that the PTI-led government was toppled by purchasing the conscience of the lawmakers.

Vowing to overthrow the government through the constitutional way, Rashid berated Finance Minister Ishaq Dar, saying that Dar is lying over LC.

He added that "I was silent for the past eight months, but I want to say today that the army is mine, the judiciary is mine. I am proud of my Pakistan Army."

PTI senior leader and former federal minister Fawad Chaudhry said that his party is optimistic about change in the institution.

Addressing the participants of the long march, Fawad asked the – rulers – incumbent government to accept the decision of the masses and announce the snap election. He challenged the rulers to ‘come’ and contest election, if they [rulers] feel that the masses are standing by their side.

Taking a swipe at PM Shehbaz Sharif, the PTI stalwart [Fawad] was of the view that the PM ran away to Turkiye due to Imran’s fear – as he came to know that the PTI is chief coming for the long march. Taking a jibe at PM Shehbaz [continuously], he asked PM to make his way to the Airport to meet the PTI leadership there.

Lamenting that the PTI’s mandate was snatched eight months back, Fawad made it clear that the people are not going to make their way back from today’s gathering as – according to him – it is the time to ‘rewrite’ history.

Earlier, the former premier said he is desperate to join the PTI’s long march as he has no more fear of life.

“I am facing life threat since the day I joined politics. I am going to Rawalpindi to send message to the concerned that the nation is now awake and let them free,” he said during an interview to a Britain-based media outlet.

Imran Khan said his wife came to know about gun attack on him through media. “She assumed I am well, but actually I received three bullets. It was almost impossible to survive in the assassination attempt, but fortunately I escaped life attempt.”

The PTI chief said those who hatched conspiracy to assassinate him [Imran Khan] were sitting at key positions.

He claimed the Wazirabad attack was not the first one as earlier his chopper had to make an emergency landing in flood-stricken areas and he was told by the pilot that there was something fishy with fuel.

Responding to a question, Imran Khan said he had no issue with the snap election as their popularity was growing with each passing day.

He was of the view that he could not break relations with the United States merely because of regime change conspiracy, saying he always valued relations between Pakistan and the US.

On the other hand, the police have advised PTI Chairman Imran Khan to wear bulletproof jacket for the rally and keep his movement secret.

As per the notification sent by police to PTI leadership, it has been said in the letter that the instructions of the police should be ensured for VIP security.

The Rawalpindi police have further suggested that a bulletproof rostrum must be installed for the former premier and he must wear a bulletproof jacket. It was also advised that Imran Khan must not come out of his car in a public place.

Ahead of the Pakistan Tehreek-e-Insaf (PTI) jalsa (public gathering) in Rawalpindi, the police have advised PTI Chairman Imran Khan to wear bulletproof jacket for the rally and keep his movement secret.

As per the notification sent by police to PTI leadership, it has been said in the letter that the instructions of the police should be ensured for VIP security.

The Rawalpindi police have further suggested that a bulletproof rostrum must be installed for the former premier and he must wear a bulletproof jacket. It was also advised that Imran Khan must not come out of his car in a public place.

Rallies from different parts of the country are travelling to the garrison city of Rawalpindi to resume PTI’s long march as Imran Khan wants to mount pressure on the government for fresh elections.

The PTI chief will also rejoin the major rally in his first public appearance since an assassination attempt earlier this month, when he sustained bullet wounds after his long march was attacked near Wazirabad city of Punjab. Since then, he has been addressing the crowds via video link before he halted the "Haqeeqi Azadi" march till November 26.

The PTI has shared various videos on its official Twitter handle, showing convoys moving towards the Rawalpind for public gathering.

A large convoy can been seen leaving Gilgit-Baltistan for the Pindi Jalsa as party supporters are enthusiastic to listen to their leader Imran Khan.

Venue relocated to rehmanabad from faizabad

The PTI has once again changed the venue from Faizabad to Rehmanabad on Murree Road while the Imran Khan’s helicopter will land at Pir Mehr Ali Shah Arid Agriculture University from where he will head to the venue for the major rally.

The deputy commissioner Rawalpindi said that the PTI had been granted permission to hold the public meeting at Rehmanabad, adding that the party has been asked to implement the conditions laid down for the event.

Earlier, the party was scheduled to stage the power show at Faizabad.

To build pressure for fresh elections

PTI Chairman Imran Khan on Friday said that his party will continue to mount pressure on the incumbent government till elections.

It is pertinent to mention here that earlier Interior Minister Rana Sanaullah had also asked PTI leadership to postpone their rally as Imran Khan’s life is in danger.