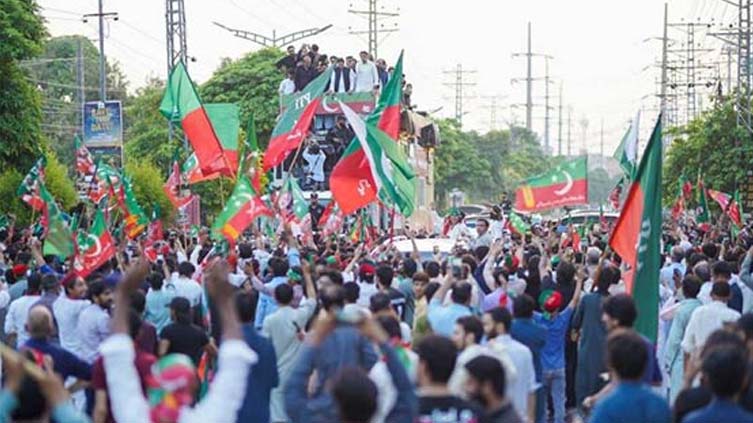 ISLAMABAD (Dunya News) - Pakistan Tehreek-e-Insaf (PTI) has been granted NOC by the Islamabad administration to hold a rally in the Capital but on 35 conditions.

PTI has been given the permission to hold peaceful protest in Islamabad on the application of party leader Ali Nawaz Awan.

A deal between PTI and Islamabad administration was made in which 35 conditions were made.

Islamabad Deputy Commissioner on Saturday issued the NOC to PTI for holding a rally from Koral Chowk to Chak Beili Rawat.

The Islamabad DC cautioned the PTI that their rally is not allowed to alter the route fixed already.

Any deviation from the rally route will ultimately lead to cancellation of the NOC, the DC added.

DC says rallies not allowed due to imposition of Sec 144

Meanwhile, the Islamabad DC had earlier said that Section 144 was imposed in the federal capital therefore, no rallies or processions could be taken out.

He warned the PTI leadership that a legal action would be taken against them in case of violation of law. No one will be allowed to take law in his own hands, he said adding that the PTI marchers would have to pass through Rawat, Islamabad to reach Rawalpindi.

Police warned of action if any of the rally participants were spotted carrying arms or violating the prescribed code.

A traffic plan would be also issued to ensure smooth flow of traffic.

On the other hand, federal capital’s Inspector General of Police (IGP) on Saturday submitted a report in Islamabad High Court (IHC) on protest and long march by PTI and recommended seeking financial guarantees from PTI.

In the detailed report submitted to the high court, IG Islamabad said that PTI violated the agreement during previous march and the inflammatory statements of Ali Amin Gandapur and other PTI leaders are also part of the report.

The report further states that a PTI leader threatened the Interior Minister while Sheikh Rashid and Faisal Vawda have said that the long march could become bloody and even Chairman PTI himself admitted that some of his people are armed.

The capital police chief further said that the Supreme Court has made it clear that the right to assembly cannot be used to send a legal government packing.

It has been requested by IG Islamabad that federal agencies should be deployed on the roads leading to the airport.

The report further states that if the PTI gives the required guarantee, there will be no need to even block the roads with containers.