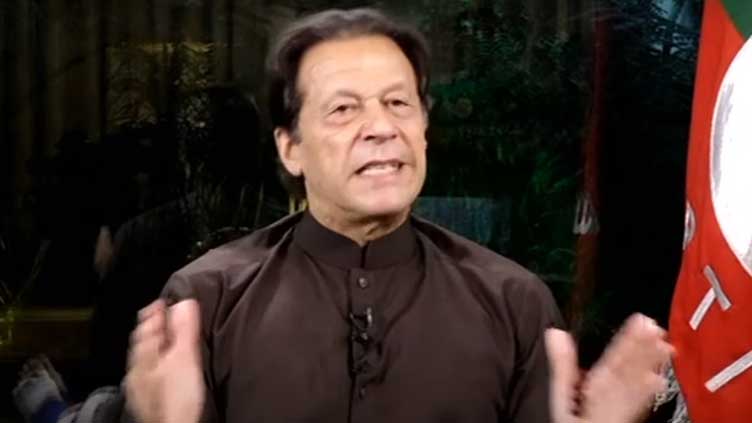 LAHORE (Dunya News) – Former prime minister and Pakistan Tehreek-e-Insaf (PTI) chairman Imran Khan said on Friday that there is no corruption case against him but former PM and Pakistan Muslim League-Nawaz (PML-N) supremo Nawaz Sharif is afraid that the accountability would start again if he came into power.

Addressing long march participants in through video link in Chakwal, Gujar Khan, Khyber and Buner, he said that the movement for real independence will continue even if the elections are announced. He said that the time has come for the real independence, adding that the country’s elected representatives should make decisions instead of a superpower.

“If India can buy oil from Russia then we should also buy,” he said, adding that the government don’t buy oil from Russia because it doesn’t want to angry superpower but this is slavery and the independent states make decisions keeping in view their interests.

Nawaz will use Army Chief s appointment for personal gains

Earlier, the former premier while urging Chief Justice of Pakistan (CJP) to deliver justice said that the lack of justice in Pakistan is the cause of the country’s destruction and the Chief Election Commissioner (CEC) is also an ally of the ruling PML-N, while it is being controlled by handlers.

Addressing long march participants through video link on Tuesday, he said that the risk of repaying loans to banks was 5% during PTI govt’s tenure that has now exceeds 5.64 percent which means our economy has been devastated.

Imran Khan said that the world is considering Pakistan’s economy as weak due to which it wouldn’t be able to return its debt, adding that now the investors will be afraid of making investments.

The PTI chairman while quoting the economic survey said economy witnessed historic growth during his nearly four-year tenure, adding that the economy started declining after the incumbent rulers were “imposed” on the country through “conspiracy”.

Turning his guns towards former PM and PML-N supremo, Imran Khan said Nawaz Sharif would want his cases to be revoked whenever he would appoint an Army Chief.

Meanwhile, Imran Khan while speaking to a delegation of journalists, berated the incumbent government, saying that the rulers are nervous about the appointment of the Army Chief.

Talking about an assassination attempt on him in Wazirabad, Imran Khan stated that he was certain he was shot by a sniper, adding that there were multiple assailants. The former prime minister further said that the JIT has started an investigation into the matter, adding that Punjab CM Chaudhry Pervaiz Elahi is not responsible for the non-filing of an FIR.

Giving his take on the country’s economy, Imran said that the fear of Pakistan’s default increases because the economy cannot be put on the right track due to political instability, but the only entity on which Pakistan’s economy is heavily dependent is the Overseas Pakistanis.

On the other side, PTI chairman Imran Khan has appealed to his supporters – within the country and Overseas Pakistanis – to provide funds for his ‘Haqeeqi Azaadi’ movement.

In this regard, the former premier stressed the need for fundraising or collection of money to make movements like this – ‘Haqeeqi Azaadi’ – a success.