Don't want to go against interest of people by antagonising US: Imran Khan 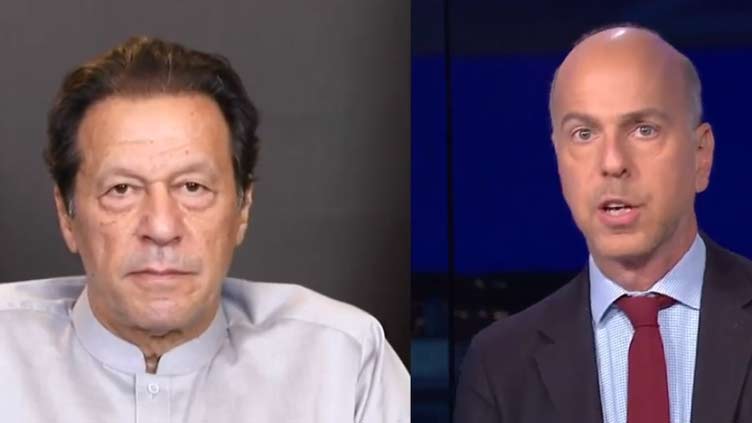 Don't want to go against interest of people by antagonising US: Imran Khan

Don't want to go against interest of people by antagonising US, says Imran Khan

LAHORE (Web Desk) – Former prime minister and Pakistan Tehreek-e-Insaf (PTI) chairman Imran Khan on Wednesday while denying on having backtracked on his claim that he was toppled as part of a collusion between the US and the Pakistani elite said that he didn t want to go against the interests of the people by antagonising the United States.

In his interview to France 24, the former PM while accusing incumbent top government leaders including Prime Minister Shehbaz Sharif and the interior minister, saying they feel threatened by his party s popularity in view of the next elections in the country said that  there is still a threat  to his life.

Imran Khan claimed that the suspect arrested in the assassination attempt against him at a protest rally, during which he was shot in the leg, was merely a decoy and that there was another gunman at the rally in Wazirabad. He said he only trusted the chief justice to conduct an independent investigation, arguing that any other probe would be sabotaged by the interior minister.

Khan also said he feared he could be attacked again in the near future: "They think that the only way to get me out of the way is actually [to] eliminate me. So I think that there is a threat, still."

The PTI chairman said he feared further attempts on his life but vowed to rejoin the anti-government march. He said he would take "more precautions" but vowed to carry on regardless of the risks, insisting that the protest march would remain peaceful. He said the only solution was free and fair elections, stressing that his party was certain to win them.

“A head of the top institution shouldn’t have held a press conference,” Khan laments and added he think the presser has damaged the image of the institution. “I am a supporter of a strong army in the country and Pakistan s best journalist, who fled the country after severe threats and later assassinated, was discussed.”

The PTI chief said, “I will continue struggle for rule of law in the country as it is the biggest issue of the country, while the political mafia and institutions are above the law that is why the country is left backward.”

“It has been my policy for 26 years that there should be rule of law in the country and no such threats can stop me from my mission,” he added.

Earlier today, addressing the long march participants in Jehlum, Mardan, and Sargodha through video link, the PTI Chairman said the Army Chief’s appointment should be made on meritocracy.

He added “One of the purposes of staging the march is to tell his supporters that Shehbaz Sharif and his son – Hamza Shehbaz – were about to convict in the case of Rs16billion at the time of the conspiracy. But the rulers waived their cases of Rs1100billion by passing the law in the National Assembly.”

Reiterating that the rule of law and justice would not be possible if the rulers keep on giving NRO to themselves and this will lead to the prevailing of the ‘law of the jungle’ in the country, Imran added that contrary, if anyone of the citizens of any highly developed country would involve in plundering, there remains no chance for that person to get NRO.

Recalling that there is no scarcity in the country’s resources, the PTI chairman said that the thing which made the country drag backward is the non-existence of rule and law.

Urging his supporters to get ready for heading to Rawalpindi, Imran said that he would further reveal his plan over heading towards Rawalpindi within two days, vowing to not do any sort of violation, while staging the PTI’s protest – in a peaceful manner.