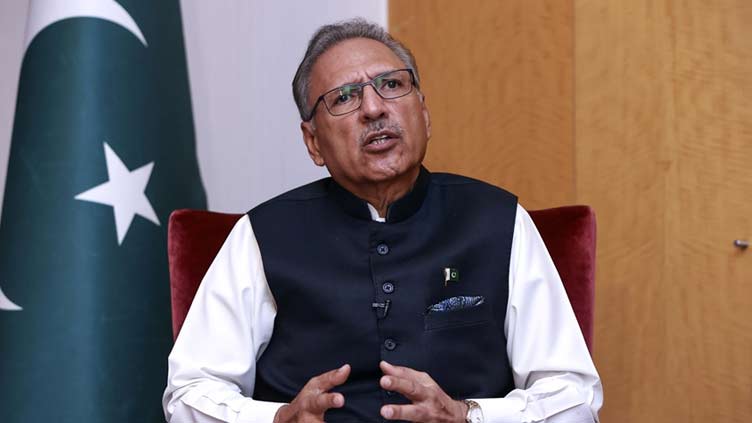 LAHORE (Dunya News) – President Arif Alvi said on Saturday that he continues to convey messages as dialogues underway to end political deadlock, while he is trying to improve relations between former prime minister and Pakistan Tehreek-e-Insaf (PTI) chairman Imran Khan and the establishment.

He said this in his meeting with senior journalists at Governor House in Lahore. The president said that there is no harm in holding consultation on the appointment of the Chief of Army Staff (COAS).

Dr Alvi said that it would be better if elections are held soon and the discussions should be for the stability of democratic institutions. “I keep on conveying messages,” he said adding that the constitution allows to take a vote of confidence, but he is not in this position.

“I do not do anything after consulting with PTI chairman Imran Khan, adding that the former PM is an old friend and I consider him a leader.”

Earlier today, addressing a Public Awareness Seminar on Wafaqi Tax Mohtasib, President Dr Arif Alvi said there is a need to ensure strictness against tax evasion and tax collecting authorities must create easiness for taxpayers. To creat awareness among people regarding the Federal Tax Ombudsman (FTO) initiatives was essential, he added.

He said that there was need to understand the spirit of giving tax in accordance with Islamic teachings. Arif Alvi said that Zakat was a compulsory while charity was paid on voluntarily basis. He said, “Alternate Dispute Resolution (ADR) process is adopted internationally which helps to resolve disputes without a trial.”

The president appreciated FTO Dr Asif Mahmood Jah for following ADR for quick redressal of the complaints. He emphasized on educating people to choose a right way for redressal of their complaints as people hesitate in this regard. He said that women ombudsperson would redress the complaint of any woman if she had a complaint regarding illegal occupation on her property.

The president said: ” The country has a lot of potential to overcome all challenges.” He stressed upon the need to follow the sacred and glorious teachings of the Holy Prophet Hazrat Muhammad (Peace Be Upon Him) in letter and spirit to establish a welfare state.

On this occasion, Punjab Governor Muhammad Balighur Rehman appreciated the role of the FTO. He also lauded the country’s business community which always stood with people in difficult times and carry out philanthropist work wholeheartedly. He said: “Tax payment is a national responsibility of every citizen.” The governor added that the Federal Board of Revenue should ensure transparency besides dealing taxpayers in a friendly way.

Federal Tax Ombudsman Dr Asif Mahmood Jah said: ” The FTO has become a public relief oriented department.” Outreach mechanism had been made easier so that maximum people could benefit from the services of the FTO, he added. He said a special overseas Pakistanis grievances redressal cell had been set up for prompt redressal of complaints of expats.

Later, President Dr Arif Alvi also gave away cheques of refunded amount to Suzuki car buyers who had been benefited due to reduce tax rate from 17 to 12 per cent.