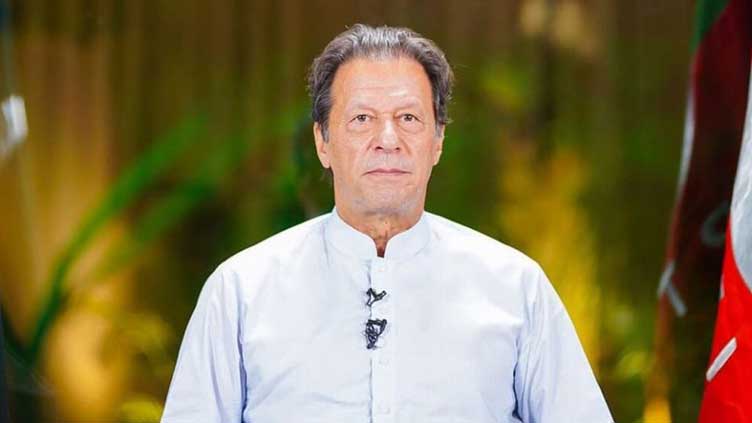 GUJRAT (Dunya News) – Former prime minister and Pakistan Tehreek-e-Insaf (PTI) chairman Imran Khan said on Friday that Prime Minister Shehbaz Sharif is deciding on appointment of new army chief after consultation with fugitive Nawaz Sharif, while London’s drama is not staged for strengthening institutions but PML-N supremo will appoint army chief to the man who would help him in return.

Addressing long march participants in Gujrat through video link, he said that the next army chief should be appointed on merit but the former PM will never let this happen as they wanted to save their theft by controlling the institutions.

The PTI chairman said that Shehbaz Sharif will now take decisions after meeting his fugitive brother in London.

“The one [Nawaz] who looted country for the 30 years will make decisions about army chief’s appointment, elections date and caretaker setup,” he said. “No one can even imagine that this can happen in a civilised society because rule of law prevails there.”

The PTI chief said since influential people get what they want, society was now witnessing anarchy as everyone who could not make ends meet resorted to theft.

He said that the leader of the biggest party of the country cannot get an FIR registered after an assassination attempt against him.

Imrna Khan said that these corrupt people are closing cases against them and pushing the country into darkness. The economy is drowning, industries are closing and foreign debt is rising rapidly, he added.

The supporters of the PTI have resumed a march to the federal capital a week after the former premier was shot and injured at the public rally.

The marchers set off from the same place where Khan was shot on Nov. 3. The former cricket star, who is still recuperating from his injuries, will join the convoy once it’s closer to the capital in about two weeks.

He said thieves have no relation with the religion and only care about concealing their theft. He said no action was taken over torture on PTI leader Shahbaz Gill and Senator Azam Swati, adding that whatever is happening in the country is bringing bad name to the country across the world.

The former PM while raising question on presence of pictures of slain journalist Arshad Sharif said that his mother is not being provided the postmortem report despite repeated demands.

“I knew the plan. The plot was prepared in September,” Khan told his supporters, without presenting any evidence for his claims. “The march will just get strengthened after this incident.”

Khan has described the shooting as an “assassination attempt” and blamed Prime Minister Shehbaz Sharif and Interior Minister Rana Sanaullah for being behind the attack.

Khan was ousted in April in a no-confidence vote in Parliament, but he says his removal was unlawful and a conspiracy by his political opponents orchestrated by the United States, a charge denied by both Washington and Sharif.

Khan’s protest convoy started from Lahore two weeks ago with Khan and thousands of his supporters – in trucks, cars or on foot – marching toward Islamabad for what was to be an open-ended rally until his demands were met.