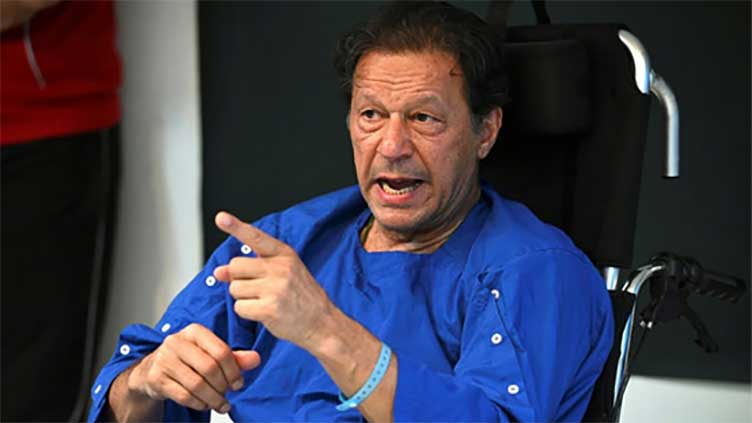 WAZIRABAD (Dunya News) - A case of attack on Pakistan Tehreek-e-Insaf (PTI) chairman Imran Khan during the long march has been registered in Wazirabad city police station.

According to details, the FIR has been registered by sub-inspector Aamir Shahzad on Monday night. The case of firing on former Prime Minister Imran Khan was registered under the provisions of murder, attempted murder and anti-terrorism, while only Naveed, the man who was arrested on the spot, has been named as an accused in the case.

The FIR stated that Imran Khan was coming from Allah wala chowk to Wazirabad on a container and around 4 pm the suspect Naveed opened fire with a pistol. A PTI supporter named Muazzam who was involved in the march, died of gunshot wounds, while chairman PTI was injured on the container. The FIR also mentioned 11 known and some unknown injured.

It further stated that a PTI worker tried to catch the accused Naveed, and so he could not fire any further due to being held by the worker. After the tragic incident, Imran Khan left for Lahore for proper treatment after receiving medical aid.

On the other hand, the Long March attack took place in Wazirabad, which is a part of Gujarat division. The Chief Minister Punjab Chaudhry Pervaiz Elahi had issued a notification to make Wazirabad a district and add it to Gujarat Division.

According to the FIR registered by the police, the incident of firing on Imran Khan and other leaders during the long march took place in Gujranwala.

In this regard the sources said that, the investigation may be affected due to the change of district, however, the police termed it as a clerical error and said that it will be rectified.