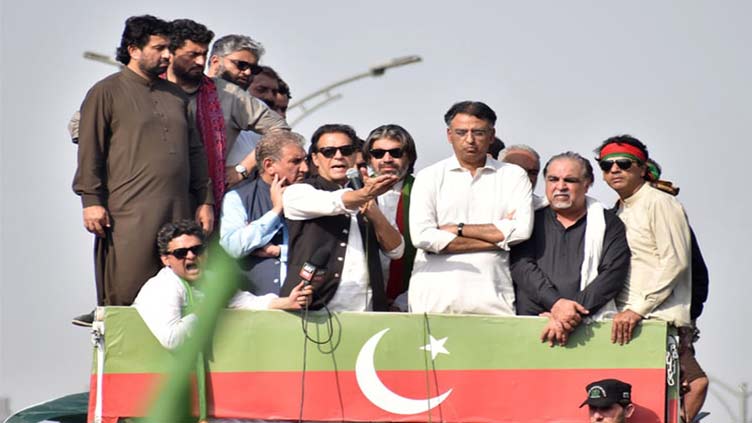 LAHORE (Dunya News) Pakistan Tehreek-e-Insaf (PTI) Chairman and former prime minister Imran Khan on Tuesday stated that those with power should involve themselves in the decision-making process for reconciliation.

In an interview with the US media, the former premier [Imran] stated that the purpose of the long march is to demand ‘free and fair’ elections, adding that polls should not be delayed and should be held immediately.

Imran emphasized the significance of rule of law, stating that when the rule of law prevails in a country, it equalizes both the privileged and underprivileged segments of the society. Imran, who slammed the rulers, claimed that individuals, who are in positions of power receive NRO after stashing money, but the weak are in jail.

The PTI chief claimed that despite the fact that Azam Swati and Shahbaz Gill had both endured the worst forms of torture while being arrested, no one had spoken out in support of them.

Earlier, Imran Khan stated his commitment to establishing a government as per people’s choice by toppling the incumbent government, which he described as ‘a group of looters.’

In his address to the participants of the long march, the former premier expressed his gratitude to the PTI’s supporters in Gujranwala and noted that they even surpassed Lahoriites in terms of turnout.

Imran stated that he is witnessing the fervor and consciousness of the people of Gujranwala and hoped that one day soon, they [the march’s participants] will be able to tell their children about the success of the PTI’s true freedom movement.

The PTI chief berated Nawaz, stating that he is there to serve the country, unlike him [Nawaz], who fled the country. Nawaz is waiting to get the NRO from a powerful segment, so that he could return to the country.

Continuing to take a dig at Nawaz, Imran said, “All of us would welcome Nawaz, when he will return home by taking him to Adiala jail, directly from the airport. Even Nawaz had rigged his medical reports. .Together with Asif Ali Zardari, the largest sickness of the country, he [Nawaz] is actively engaged in a conspiracy.”

Speaking of the need for true freedom, the former premier [Imran] asserted that unless a country achieves true independence, it has no standing in the world. The PTI chairman continued by stating that although the people of the independent nation have rights, those who are slaves do not rise.

Recalling his thoughts on the assassination of prominent journalist Arshad Sharif, Imran stated that he [Arshad Sharif] was forced to leave the country and was slain because he stood by the side of truth.

Appealing the Chief Justice of Pakistan to deliver justice to the PTI leaders – Azam Swati and Shahbaz Gill –, Imran also lashed out at the Chief Election Commissioner again, alleging that he [CEC] is a slave of the Sharif family.