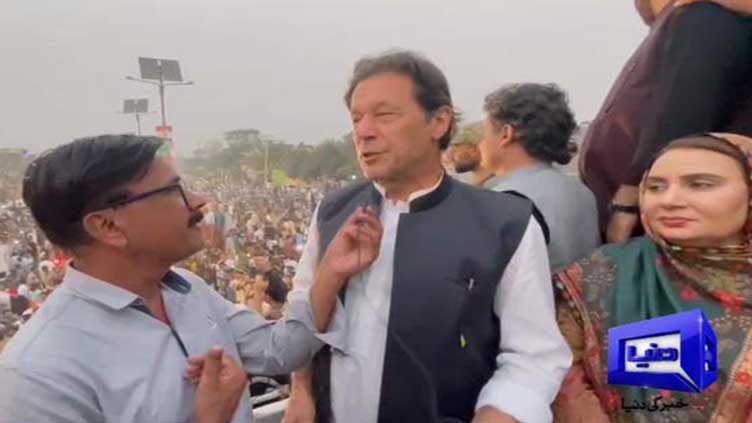 KAMOKE (Dunya News) - Former Prime Minister and Pakistan Tehreek-e-Insaf (PTI) chairman Imran Khan while reacting to Prime Minsiter Shehbaz Sharif’s claims of contact over the appointment of the new army chief said that there is no hope of talks with one who used to meet the army chief in a car trunk.

Speaking exclusively with Dunya News, the former premier said that negotiations with Shehbaz Sharif cannot be held because there is no hope oftalk with the one who meets the army chief in a car trunk, adding that the incumbent government was created with the aid of turncoats and foreign conspiracy.

"Our only demand is a free and fair election, and President Arif Alvi has been nominated for negotiations," Imran added.

"It would be good if the matters were not resolved before reaching Islamabad because the rulers should see the sea of people," said the former premier.

On day three of the Pakistan Tehreek-e-Insaf (PTI) "Haqeeqi Azadi March" former Prime Minister and PTI supremo Imran Khan on Sunday said that Pakistan has an inhuman justice system, and thieves and bandits were imposed on us.

"But in a human society, there is justice," Imran claimed, adding that this was exactly the "revolution" Pakistan was seeing right now.
Imran Khan said that he and the nation would not stand with the establishment for supporting thieves.

He went on to say that people on social media were receiving threats and were being oppressed.

The former premier questioned, "You should be ashamed of what you did to Azam Swati. What was his crime? A tweet in which he criticised the army chief?"

"What kind of a calamity was it that you had to inflict torture on him [Swati]?" he added.

He told his supporters that this was the time to change their destiny and side with the truth.

"These tyrants make us worship the idol of fear," Khan said.

Imran Khan told his supporters that "I have one goal, we want justice in our country. It’s time to change our destiny. They are threatening and oppressing."

Earlier on Saturday, asked the Chief Justice of Pakistan Umar Ata Bandial to protect the fundamental rights and also to take action against the "custodial torture" of PTI leader Azam Swati.

Imran Khan continued: "Today, chief justice, I am asking you to take action and listen to Azam Swati’s appeal. Show that we are a society of humans and not animals. There is justice in human society … It is our right that we are given justice."

On Friday, former prime minister Imran Khan said that the government is surviving due to the support of the establishment.