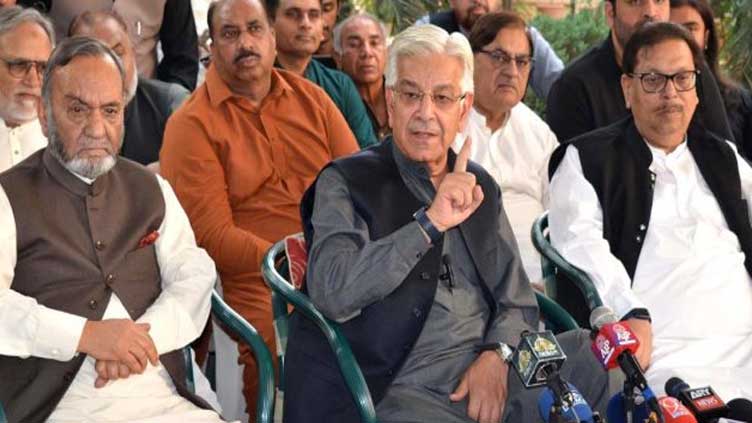 Addressing a press conference at his residence here on Sunday, he said that it was claimed from the march container that negotiations were going on with the government, but "I would clarify that no negotiations are taking place with Pakistan Tehreek-e-Insaf".

The minister said that due to the language Imran Khan was using against the Pakistan institutions, the Indian media was giving full coverage to him. He said PTI chief had been exposed before the nation, adding that his narrative showed that he was not sincere with the public.

That was why, he added, his march was reducing in strength with each passing day. When he started the long march on Friday, 10 to 12 thousand people were with him. But now, when he reached Muridke, only 3,500 to 4,000 people were part of his long march, he added.

Kh Asif said that earlier, the Pakistan Democratic Movement (PDM), then the opposition parties, used to expose Imran Khan’s real face before the nation, but now it was being done directly by top officials of the institutions.

Kh Asif welcomed the armed forces’ decision to distance themselves from politics. He said that the institution, which had been making sacrifices for the country and the nation for the past 75 years, was being dragged into politics by Imran Khan, which was regrettable.

He said, "Our forces and our intelligence agencies are among the best forces and agencies in the world. The armed forces have always rendered sacrifices in the war against terrorism and the entire nation supports them. "

The defence minister said Imran Khan should tell the nation which of his promises have been fulfilled during his government. He said the national interest should be given priority over personal interests. He said the most important issue at the moment was the country’s economy; the country should be economically stable, for which the coalition government was striving.

To a question, Kh Asif said most of the PTI’s march was taking place within the boundaries of Punjab and Khyber-Pakhtunkhwa provinces, and if any bloodshed happened, the provincial governments of Punjab and KP would be responsible for it.

Replying to another question, he said Imran Khan was demanding fresh elections, but first he should dissolve his provincial assemblies in two provinces, Punjab and KP, and hold elections there. He reiterated that the general elections would undoubtedly take place on time.