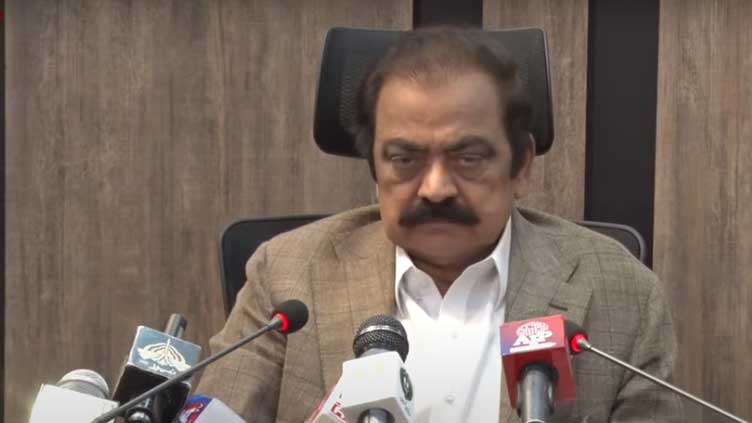 Rana Sanaullah brought forward an alleged audio during a news conference, in which PTI leader Ali Amin Gandapur spoke to an unknown person.

According to the audio, PTI leader and former federal minister Ali Amin Gandapur talked to an unknown persons regarding bringing men and guns in the long march.

Transcript of the audio

Ali Ameen Gandapur: How many guns are there?

Unknown person: Men are available as many as you want

Ali Ameen Gandapur: Okay, we are camping here near the colony

Ali Ameen Gandapur: What is the nearest place here? Which colony is adjacent to it?

Unknown person: On our side?

On the left side of the toll plaza, what place is it? Top city or capital?

Unknown person: Both, top and capital and many

Ali Ameen Gandapur: Top is at the airport?

Unknown person: Top is on the airport side, I had sent you a map

Ali Amin Gandapur: I received it, I have it.

You just keep the men and equipment ready there.

The minister said audio leak has revealed that Imran Khan s march can lead to any untoward situation. He said this audio leak raises serious question on security situation, therefore, now it is responsibility of the law enforcement agencies to protect the Federal Capital from armed people.

He also appealed the Punjab government to take strict legal action against all such elements as information is pouring in that this march is aimed at creating chaos in the country.

The PML-N categorically said that no one will be allowed to violate security measures of the Federal Government plans to create law and order situation.

He also appealed the nation including parents and elderly people to educate their children regarding real anarchic nature of this long march and abstain them from becoming part of it.

As per sources, the committee will be headed by Interior Minister Rana Sanaullah. While the sources have further revealed that coalition government leaders Ayaz Sadiq, Khawaja Saad Rafique, Qamar Zaman Kaira, Syed Aminul Haque, Mian Iftikhar, Maulana Asad and Marriyum Aurangzeb are included in the committee.

The sources have further revealed that the committee has been formed to make sure the long march will be peaceful, to maintain law and order and to hold political talks. If anyone will have to negotiate regarding the march, they will talk to the committee.

As per the sources, PM Shehbaz said that we are democratic people and ready to talk but no one will be allowed to take law in their hands.

On the other hand, the former Prime Minister and PTI Chairman Imran Khan and thousands of supporters started a long-promised march to the capital, Islamabad, to challenge the government of his successor and demand early elections.