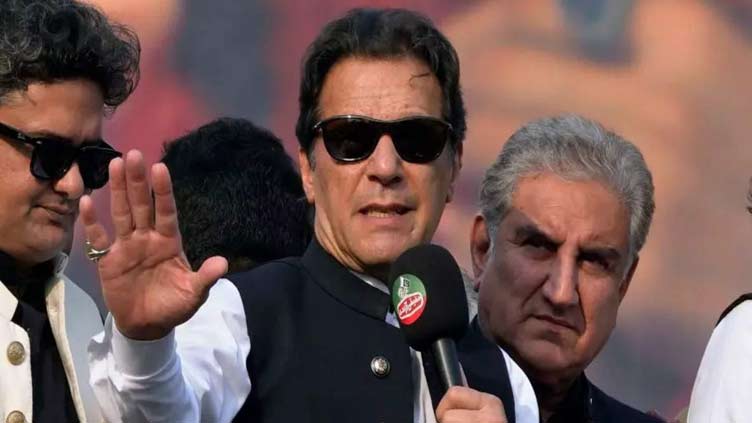 LAHORE (Dunya News) – Former prime minister and Pakistan Tehreek-e-Insaf (PTI) chairman Imran Khan said on Friday that the government is surviving due to the support of the establishment.

Speaking exclusively to Dunya News, he said that there is no government in the country at this time but is surviving due to the support of the establishment.

The former PM said that the government of thieves and the rulers are facing corruption cases, while it has also failed in stabilizing the country’s economy nor it [government] could solve governance issues.

Imran Khan went on to say that those who cannot contest election want interference and public is not with the rulers. The rulers want to engage us in backdoor dialogues and bow down before the US.

Earlier today, the former PM and thousands of supporters started a long-promised march to the capital, Islamabad, to challenge the government of his successor and demand early elections.

Khan maintains that his ouster in a parliament no-confidence vote in April was unlawful, and a conspiracy by his political opponents orchestrated by the United States — a charge denied by both Washington and Pakistan’s new premier, Shahbaz Sharif.

Thousands of demonstrators, many of them piled into hundreds of trucks and cars, left Friday from the eastern city of Lahore, Pakistan’s cultural heartland. Many who joined the march at the start were walking on foot. The convoy, which was expected to arrive sometime next week in Islamabad, got off to a colorful start as Khan’s supporters danced to the beat of drums and sang patriotic songs.

Numbers are also expected to swell along the way — Khan, a former cricket star and national sports hero, is hugely popular and has been able to rally followers to the streets.

Addressing supporters before the departure from Lahore, Khan described the endeavor as a “peaceful march” and claimed his political struggle against the government would continue until Sharif’s administration agrees to hold early elections. The government has repeatedly said the elections will be held as scheduled, in 2023.

Imran Khan said, "I am starting the most important journey in the political journey of 26 years, the time has come for us to start the journey of real freedom of this country."

"My march is not for politics, not for elections or personal interests, but only for the purpose that the nation should be truly free, our decisions should not be in Washington or Britain, but Pakistan’s decisions should be in Pakistan and for the people of Pakistan," he said.

Earlier in a video statement, the former PM said that the ’real freedom’ march is starting from Liberty Chowk on Friday, adding that this long march is not for any personal interest, and not to topple anyone’s government.

"PTI’s march is for true freedom after the freedom gained from the British because we want a country in which decisions are made by Pakistanis, not by foreign puppets," he added. Imran Khan vowed that the PTI will continue to fight for real freedom until the doors of foreign conspiracies to get power are blocked.