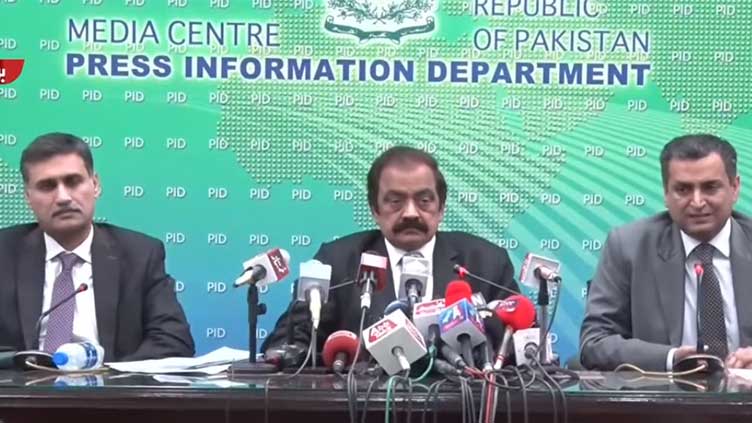 ISLAMABAD (Dunya News) – Minister for Interior Rana Sanaullah on Friday rebuked allegations levelled by Pakistan Tehreek-e-Insaf (PTI) leader and Senator Azam Swati and that he was only in the custody of Federal Investigation Agency (FIA).

Addressing a press conference flanked by the FIA officials on Friday, he said that the Federal Investigation Agency (FIA) did not hand Azam Swati over to any other institutions.

“Imrani fitna have adopted the agenda of chaos to create riots and anarchy in the country,” he said, adding that PTI supporters have been targeting officers of the institutions for the last few days.

Sanaullah maintained that Swati committed “contempt of two institutions” in his tweet, adding that the PTI leadership was “just hurling allegations and propagating against state institutions.”

Commenting on the PTI leader’s custody by the agency, he said: “Azam Swati was in FIA’s custody. He was neither handed over to anyone else nor did anyone ask for him to be handed over. The case against him was filed by the FIA over a highly-objectionable tweet.” “It is important to put facts before the nation, as they lie brazenly,” the minister said.

The minister said PTI leaders should not compromise their prestige just to support their leader’s anti-state agenda, but they should show some moral courage in saying the right things publicly.

Condemning the allegations of Azam Swati, Rana Sanaullah said FIA’s case against the PTI leader was lawful, completing all legalities.

He said Azam Swati was treated according to law and even medical facility was provided to him properly. Regarding PTI’s long march, the Interior Minister said the red zone is a red line for any such gatherings. The Minister said any untoward situation will be dealt with strong hands as no one is above the law.

Earlier talking to media, the minister said that he will not allow any group to attack the capital city Islamabad. The said group [PTI long march] will destroy the existence of the cultural state.

Prior to Pakistan Tehreek-e-Insaf (PTI) long march while talking to the media in Rawalpindi, Rana Sanaullah said that the Interior Ministry will fulfill its responsibility, if the march moves in accordance with the law.

He said PTI chairman Imran Khan’s entire narrative was based on lies. The public was being fed with lies and fraudulent narratives.

The Interior Minister said that the orders of the Supreme Court and the High Court regarding the protest in Islamabad are clear.

The long march will be given an opportunity to protest with full security at the place designated by the court. The government will fulfill its responsibilities for peaceful protest, he added.

Furthermore, Rana Sanaullah said that all matters related to the slain journalist Arshad Sharif have been entrusted to the inquiry commission and a lot of things have come up but he can’t reveal them right now. The report of the commission will be submitted to the Ministry of Interior, he stated.

Also reacting on the press conference of DG ISI and DG ISPR, the Interior Minister said that any department, including Army Officers, facing criticism and allegations can present it’s position, and also whenever necessary, military officers should give such awareness to the public.

He further mentioned that Anti-corruption had issued a warrant for his arrest at the behest of Imran Khan. “Governor’s rule in Punjab has not been decided yet nor has any summary been sent, Imran Khan should dismiss the Punjab government,” said Rana Sanaullah.