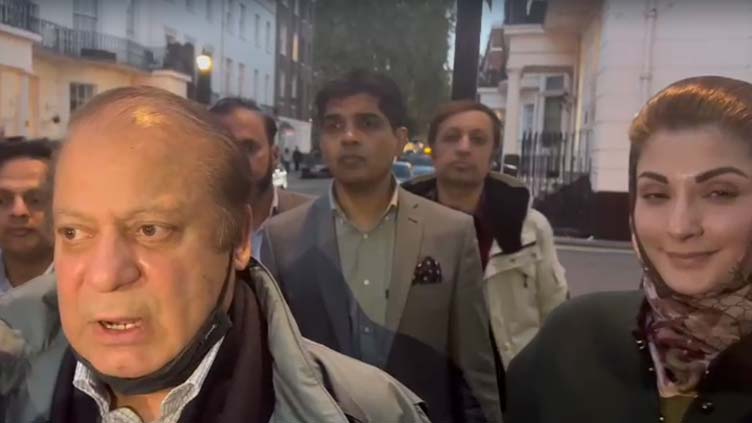 Talking to media in London on Wednesday after former federal minister and Pakistan Tehreek-e-Insaf (PTI) leader Faisal Vawda’s presser, he said, "Write down my words, the long march will fail."

The former PM said that now Faisal Vawda has also said that the long march will be bloody, adding that the PTI chairman, Imran Khan, is not bringing any revolution.

Nawaz Sharif said that the people have seen Imran Khan s revolution in the four years of his government and they just want to appoint their army chief, but the army chief is not the head of any party but a country’s institution.

The PML-N supremo went on to say that Imran Khan is not a revolutionary but a liar, adding that he calls people thieves, but he himself is the biggest thief with undeniable evidence of foreign funding, Toshakhana, and robbery worth Rs50 billion.

"Tell me what is the bigger theft than foreign funding," he asked.

Speaking on the occasion, PML-N vice president Maryam Nawaz said that the aim of the long march is to destroy Pakistan and spread fitna. "Now they need other things because their politics is also failing, and their plans A, B, and C are also failing due to the which they are trying to spread chaos."

Earlier, former PM while reacting to the Pakistan Tehreek-e-Insaf (PTI) chairman Imran Khan’s announcement on the long march date, said that Imran Khan’s long march is not for any revolution but to appoint the army chief of his choice.

Taking to Twitter, the former PM penned that "People have seen Imran Khan’s revolution in his 4 year tenure, and this long march is not for revolution but to appoint the army chief of his choice."

Nawaz Sharif further said that "Imran Khan, who called others thieves, himself proved to be the biggest thief in history with irrefutable evidence of foreign funding, Tosha Khana cases."