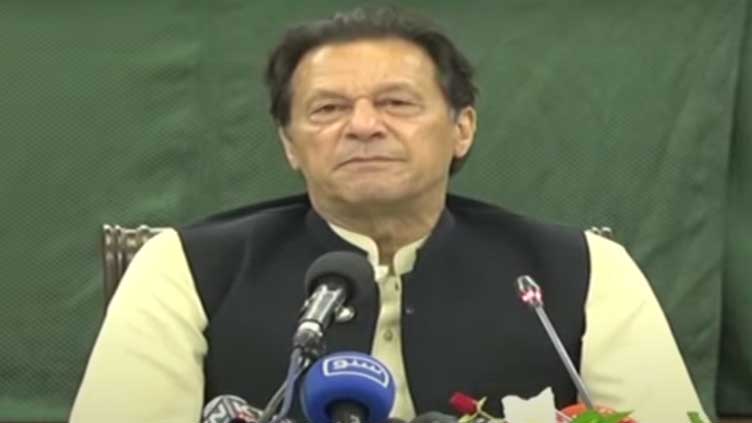 PTI chairman Imran Khan made the announcement while holding a press conference in Peshawar. “I am inviting the entire nation. People belonging to all walks of life including labourers and others should participate in the long march for the real freedom of the country,” said Khan.

He said that the people will gather at Liberty Chowk at 11am from where the long march will start.

“We will gather at Liberty at 11 o clock and from there the march towards Islamabad will begin,” he said and added he was told that he is irresponsible and the country is in big trouble.

The PTI chairman said that the country was facing historic external debt when he came into power and record taxes were collected during his tenure, adding that his government also fought with the coronavirus pandemic.

The former PM said that "It is my prediction that a sea of the masses will join the long march, and now the people will decide who will lead this country because Pakistan is in a critical phase and now we have to decide whether we want real freedom or slavery."

Reiterating that the political parties solve problems through negotiations, not with weapons, the former premier said that he is pretty much sure that the elections will not be held. Lashing out at the incumbent government, Imran said that despite having its own Chief Election Commissioner, the government did not manage to win the by-elections.

Continuing to take a dig at the government, Imran said, “First efforts were made to disqualify me in the funding case and then in the Toshakhana case. I got the news that the rulers in Islamabad are shivering with my long march as additional police personnel from Sindh have been summoned to the centre. When JUI-F chief Maulana Fazlur Rehman staged a long march, the PTI government did not summon additional police personnel.”

Assuring to stage a long march peacefully, Imran warned that when millions of people will join the long march, the police cannot do anything.

The PTI Chairman announced to kick off his long march from Friday, while there is a probability that his march will reach Islamabad on November 4. Sources privy to the matter said that the PTI chief will continue his public campaign in Punjab, during which he will spend much of his time in his residence in Zaman Park, while the former prime minister will monitor the preparations for the long march from Lahore.

The former prime minister will address the parliamentary party meeting of the PTI, PML-Q in Lahore tomorrow, subsequently he will make his way to Sialkot for a public campaign at 2:00 pm.

Addressing his speech at the lawyers’ convention, the former premier said, “In the field of journalism, I respected Arshad Sharif more than any other journalists as he [Arshad Sharif] always used to stand by the side of truth and uprightness. Arshad Sharif was habitual of not sparing the mafias.”

“Arshad Sharif received death threats from the unnamed numbers. I got information that Arshad Sharif is about to get murdered so I asked Arshad to leave the country. Despite knowing that he had received the death threats, Arshad continued to stand by the side of honesty and truth,” added the PTI chief.

Urging the lawyers’ community to support him, Imran said, “As the phase which the country enters, it is a challenge for all of you. I have decided to counter the elements of oppression, till my last breath. It was about 26 years ago that I entered into politics to uphold justice in the country.