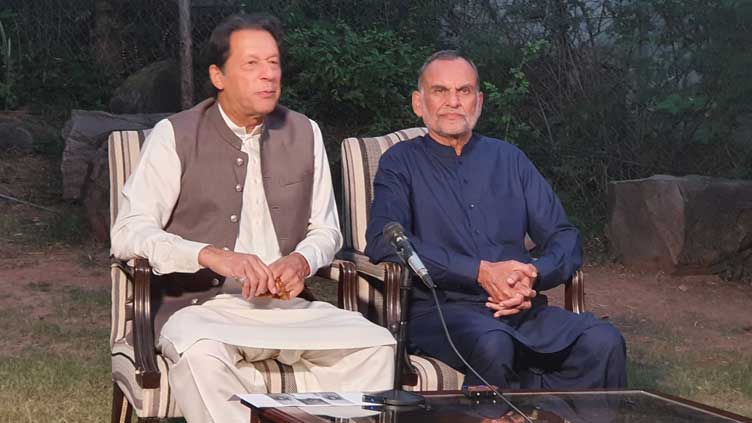 Addressing a press conference along with Senator Azam Swati on Saturday, he said that there is always a backchannel conversation going on but he don t see any result in backdoor talks.

The former prime minister said that the day the imported rulers came into power, they were trying to end his party and ran propaganda against him in connivance with the media houses.

Imran Khan said that the participants of the May 25 long march were brutally tortured and raided the houses of people, adding that the whole nation knows them. The PTI chairman went on to say that the Election Commission of Pakistan (ECP) picked weak constituencies in the by-elections but rigging in Karachi is in front of everyone.

Earlier today, the PTI Chairman challenged the verdict of Election Commission of Pakistan (ECP) in Islamabad High Court (IHC) for disqualifying him in Toshakhana case.

As per details, barrister Ali Zaffar has filed the plea in IHC on behalf of PTI Chairman Imran Khan. In the petition, it was prayed that the Election Commission has no authority to take decisions against the cases of corrupt practices and disqualification.

It was also pleaded to the court to announce the verdict of ECP as null and void and also prayed the court to hear the case on the same day.

Several objections have been raised by the registrar office on the request of Khan. It has been said in the objection that Khan did not get biometric verification done. While it was also said that there is no hurry in this case that it is compulsory to hear it today.

On the other hand, Imran Khan’s lawyer Ali Muhammad Bukhari while talking to media outside ECP, said that ECP has still not provided the copy of detailed verdict yet he tried to take the copy from ECP.

He further said that, as per the law, after announcing the verdict, a copy of the decision has been given to both parties but the legal wing of ECP is saying that sign a member is missing on the verdict.

He also accused that ECP is going against the rules which is a sad thing to do.

Imran Khan’s lawyer demanded that legal action should be taken on the actions of the Election Commission. "I have been outside the Election Commission for an hour but nothing is being said," he said. While he also questioned that how can ECP say that the decision is unanimous when one member did not sign on the verdict?