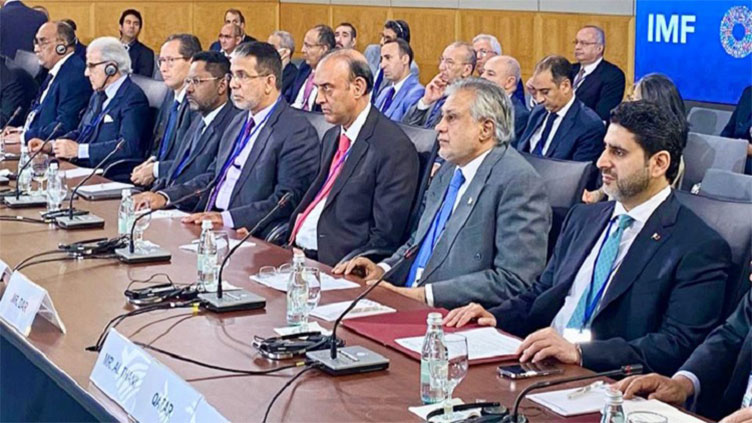 Ishaq Dar highlighted the humanitarian catastrophe and losses suffered by the Pakistan.

ISLAMABAD (Dunya News) - Federal Minister for Finance and Revenue, Senator Mohammad Ishaq Dar has called for greater policy support from the International Monetary Fund (IMF) and multilateral donors in the backdrop of the climate-induced catastrophe and losses suffered by the country.

The minister was addressing a meeting of MENAP (Middle East, North Africa, Afghanistan, and Pakistan) Ministers of Finance and Central Bank Governors with the Managing Director IMF Kristalina Georgieva in Washington DC.

He urged IMF to tailor its response to the situation in Pakistan and similar countries by taking into consideration the serious economic, social and political challenges that these countries face in the backdrop of climate induced calamities.

He highlighted the humanitarian catastrophe and losses suffered by the country. Given the scale of disaster, he pleaded more policy support for Pakistan.

He also thanked MD IMF for her sentiments and committed to complete the Fund program despite challenges, according to press statement received here Sunday.

Meanwhile, the minister and Governor State Bank of Pakistan, Jameel Ahmed met Queen Maxima of Netherlands on the sidelines of annual meetings of IMF-WB to discuss financial inclusion and banking on equality. The two sides reiterated commitment to work together to achieve fast progress in the subjects discussed.

The minister held a meeting with President Asian Development Bank (ADB), Masatsugu Asakawa and thanked him for support provided over the years as a major development partner of Pakistan and also for the recent post flood commitments.

The ADB President assured the finance minister of approval of BRACE program amounting to US $1.5 billion and of continued support to Pakistan.

The minister also met his Libyan counterpart, Khaled Al-Mabrouk and both the dignitaries discussed issues of mutual interest.

In his meeting with Managing Director International Finance Corporation (IFC), Makhtar Diop, the minister appreciated the role of the corporation in promoting private sector development in Pakistan.

He also discussed potential means of enhancing IFC engagement in Pakistan, particularly for trade finance. He assured all the facilitation required by IFC in this regard.

On the occasion, Makhtar Diop assured the Finance Minister of IFC’s continued support to Pakistan.

It is pertinent to mention here that the Finance Minister is leading Pakistan’s delegation in the IMF / World Bank’s 2022 Annual meetings being held in Washington DC.