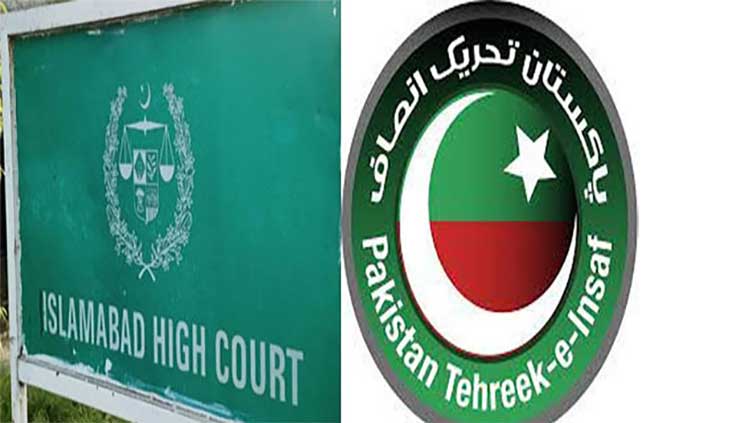 ISLAMABAD (Dunya News) - Chief Justice Islamabad High Court (IHC) Justice Athar Minallah said that the issue of resignations of Members of National Assembly belonging to Pakistan Tehreek-e-Insaf (PTI) is a political dispute which should be resolved in Parliament.

Chief Justice of IHC heard the petition against the acceptance of resignation by 10 members of PTI MNAs without constitutional method on Thursday.

On behalf of the petitioners, lawyer Ali Zafar appeared in the court and argued that the process under Article 64 was not completed.

The court inquired that the lawyer should first clarify that whether they are working against the policy of the party and has the party taken any action against them?

The CJ IHC further added that what is the purpose of this petition and is this a party policy?

The court while directing petitioners to prove their good intentions remarked that the court does not interfere in the affairs of Parliament.

Advocate Ali Zafar told the court that the petitioners are with the party policy, and not against it. On which the court questioned that then why do they want to go back to the Parliament? The court pointed out that the previous petition was different.

The Chief Justice remarked that these are political matters and the forum for their resolution is Parliament and further told the petitioners to satisfy the court that they want to return to their positions in the Parliament in true sense, if that’s the case then it’s fine, adding that Parliament is the biggest forum of this country. Go there and settle your political issues.

If you suspend the notification, we can sit with the speaker and talk, he added.

CJ IHC remarked that this court will not facilitate your political dialogue. The court grants you time until tomorrow to prove your good intentions. Go to Parliament and we will hear the petition.

Later, PTI lawyer Ali Zafar told the court that some time will be required on the matter of affidavit’s submission. The court adjourned the case indefinitely without any order.

It is pertinent to mention here that the PTI members resigned en masse after the no-confidence motion against Imran Khan succeeded and ousted him from the Prime Minister’s office. The party members refused to join the ruling parties in the Parliament and requested that their resignations should be accepted.

While, the resignations of 10 MNAs was accepted, who took the matter again to IHC claiming that the process under Article 64 was not completed and it should be reversed or accepted with other resignations.