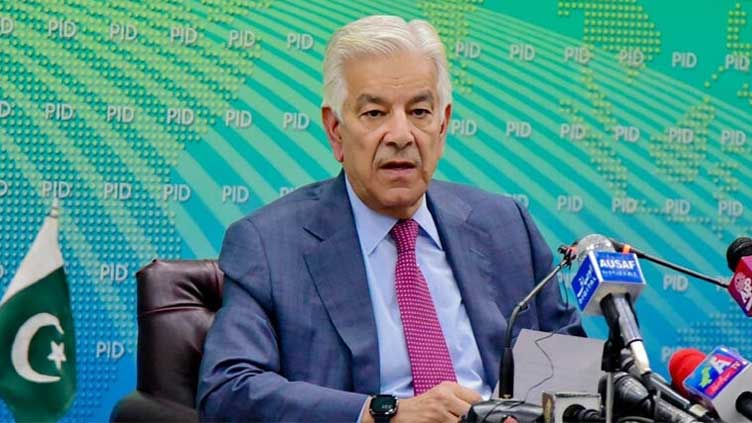 Politicians had fought for democracy for four decades under dictatorial regimes, but ironically, Pakistan Tehreek-e-Insaf Chairman Imran Khan was seeking the support of the armed forces, he said at a press conference.

The minister said Imran Khan at the same time, criticised the state institutions for allegedly not extending support to him, which showed his duplicity.

He said the PTI chief in his speech at the Taxila political gathering maligned the institutions as per his routine in the last five months. He purportedly made statements against the Pakistan Army and the establishment, while on the contrary, he was heard in the leaked audio asking his party stalwarts to manipulate the cypher by changing the minutes of the meeting while avoiding naming the United States.

Khawaja Asif said "Imran Khan should have shown some respect for the state institutions, but he instead acted in the opposite." He based his "foreign conspiracy" narrative on the cypher that he (Imran) should be ousted (from the PM House)and replaced by Shehbaz Sharif, but it was not the case.

He read out the exact statement that Imran had uttered at the Taxila meeting: "If a burglary occurs in your home and the watchman says that ‘I am neutral’. Should he be spared?"
The above statement showed the "uncalled terminology" used by the PTI chief for state institutions, he regretted.

The minister said the government was looking into the matter carefully and would take action against Imran Khan for maligning state institutions as per the law. The institutions were not meant to safeguard the interests of "thieves like Imran Khan who came into power" but rather to defend the country, he added.

"The armed forces have made huge sacrifices in the war against terror that has no precedent in the world, and the entire nation supports them," he said.

He said Imran Khan had taken the oath (as prime minister) to protect the Constitution, but he was making contradictory statements in that regard.

Khawaja Asif said, "Imran Khan first revealed that he had a copy of the cypher, but now he claims that he does not know about it. He kept it in his custody, but is now lying to the nation. I have never seen such a politician in my political career who criticises his benefactors and bites the same hand that supports him," he said.

However, behind the scenes, the same Imran Khan was begging for pardon from the establishment, he added.

The minister said Imran Khan was "scared of November as the distancing of the state institutions from politics has sabotaged his designs for another 5-year government term.

He said terrorists were carrying out activities in the northern areas and the armed forces were rendering sacrifices to end the menace of extremism. "Low intensity war against terror is underway and the nation has to stand behind the armed forces."

Likewise, he said, big NGOs were working in flood-hit areas, the Balochistan and Sindh chief ministers were in the field, and the prime minister was also visiting the flood-affected areas, but Imran Khan was not seen anywhere.

Responding to queries, he said he had two experiences of the appointment of the army chief and the process used to start by the end of October or at the start of November.

"Nawaz Sharif as prime minister had set a precedent that the outgoing army chief should have a respectable departure as he should have proper time for farewell calls with his staff and troops he had commanded. "

He said Chief of Army Staff General Qamar Javed Bajwa’s statement in the US had ended the controversy over his retirement issue.

Replying to APP’s question, the minister said the things that were not for public discussion were conveyed through cyphers in diplomatic exchanges of formal conversation.

"Our ambassadors send their impressions after having meetings with dignitaries abroad through ciphers. "Imran Khan violated the Official Secret Act and violated the security of the country by proclaiming such a highly confidential document in public," he asserted.

When asked about any legal action against the PTI chairman, the minister said the government wanted to take action against Imran Khan on strong footing so that he could not escape from the law. However, he made it clear that they had no personal grudge against him.