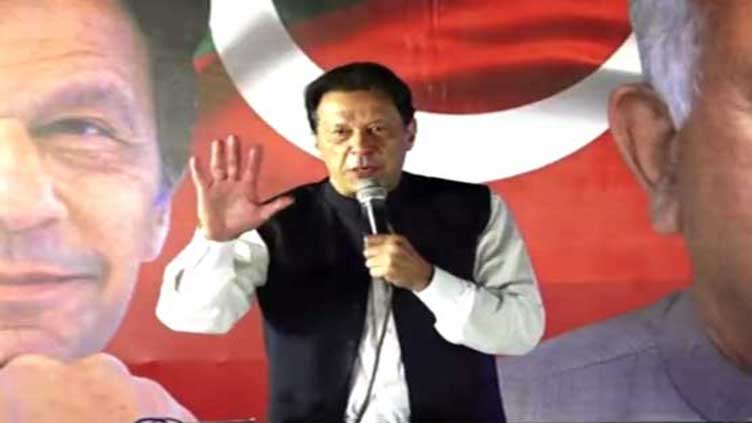 TAXILA (Dunya News) – Former Prime Minister and Pakistan Tehreek-e-Insaf (PTI) supremo Imran Khan on Sunday rebuffed a claim of the government over disappearance of the cypher, saying that the government is pretending that the cypher is lost while the original copy is in the Ministry of Foreign Affairs.

Addressing a public rally in Taxila, the former PM said he showed the cypher to the whole nation, and the message was clear in it to oust Imran Khan’s government, adding that he took the matter to the Assembly and before the National Security Committee.

“I want to thank Maryam Nawaz who never tell truth to give new life to cypher. I want to thank you for proving my statements [regarding the cypher] true,” Imran said

The former PM challenged the rulers to arrest him instead of giving threats. “This is the movement of real independence and we are ready to face jails. I am ready to go to jail and my nation as well. We are not afraid of jail.”

He said that the nation is ready to sacrifice their lives for real independence.

Imran further alleged that the chief election commissioner (CEC) was acting like a servant of the current rulers. He added that they could not defeat PTI in the fair and free elections.

The PTI chairman challenged PM Shehbaz Sharif and Interior Minister Rana Sanaullah to be prepared for the upcoming PTI protest as he is completing his preparations. "I knew about their plan, but they are completely unaware of mine. I am preparing for it and I will soon give you a call. You have to be prepared. "