As CM made decisions that damage my family business: PM Shehbaz 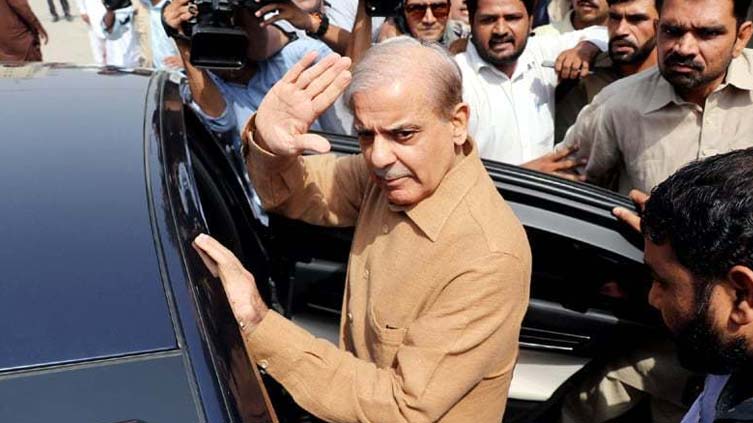 As CM made decisions that damage my family business: PM Shehbaz

The PM termed the money laundering case against him as "fake".

The prime minister and his son, a leader of the PML-N, had secured bail in the case in July after submitting bail bonds worth Rs1 million each.

At the outset of today’s hearing, the premier’s lawyer, Amjad Pervaiz, told the court that his client will appear before it in a while. Shortly after, the premier arrived at the hearing.

Starting his arguments, Pervaiz said that the first information report (FIR) registered against his clients mentioned they were involved in money laundering worth Rs25 billion from 2008-2018 through fake companies.

"The allegations are general in nature. The FIR also mentions that the Sharif Group’s companies were used for money laundering. However, in those 10 years, Shehbaz was neither the director nor a shareholder of those companies."

The FIR, Pervaiz said, was lodged after investigation and the initial paragraphs of the report do not mention Shehbaz.

The lawyer told the court that it is up to an individual whether they decide to keep movable or immovable property with them. At this, judge Aijaz Awan noted that they should declare it otherwise it becomes black money.

In the FIR, it isn’t mentioned that low-paid employees claimed that they opened bank accounts on Shehbaz’s directions, Pervaiz told the court.

Pervaiz said that the prosecution claims that Shehbaz was involved in hiding Rs4 billion that he was able to get through selling sugar, however, we will still have to review the FIR to confirm whether this comes in the FIA’s jurisdiction or not.

"The FBR (Federal Board of Revenue) or the income tax department can take action in this matter," he said.

"They (prosecution) use the name of Sharif group for political purposes. The name Sharif Group is not registered under the companies ordinance," he added.

Interrupting his lawyer, PM Shehbaz said he wanted to speak. The court allowed it.

"I have some important business in Islamabad. If you excuse me, I will leave. But before that, I want to say something."

The prime minister told the court that he, in his capacity as the chief minister of Punjab for 20 years, made decisions that "hurt" his family’s sugar business.

"I was requested to provide subsidy to sugar mills, but I refused. I refused as the amount (that would be used for subsidy) was of the poor people in Punjab," he said.

The PM termed the money laundering case against him as "fake" and said that he never provided a subsidy to sugar mills.

Noting that he had several other matters to attend to, the premier said that he has been handed an important responsibility during these pressing times.

"Petrol prices are going up. There are floods in the country. Every dollar is precious to us. I’ve prohibited exporting sugar as people would not forgive me if the price of sugar rose."

If Pakistan exported sugar, the country will get foreign exchange reserves and no one likes stopping them from trickling in, he mentioned.

After the court allowed him, Shehbaz left.

After the proceedings, the court adjourned the case hearing till October 8.