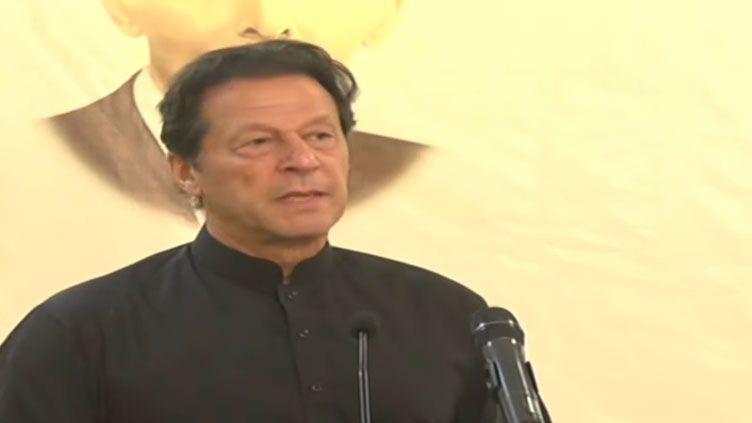 ISLAMABAD (Dunya News) - Pakistan Tehreek-e-Insaf (PTI) Chairman on Wednesday said that it is a good thing that the audio of him with Azam Khan has surfaced and demanded that the cypher should be made public now.

The former prime minister criticized the coalition government and reiterated that after the regime change, the notorious looters prevailed in the country, who waived Rs1100 billion soon after coming to power. He questioned whether the enemy could do the injustice that they [the coalition government] had done in the last five months.

Talking about China, the PTI Chairman said that when he [Imran] was the Prime Minister, relations with China were at their peak. Imran said that due to the coronavirus outbreak, China was closed for two years to foreigners. He said his government had borne the cost of the COVID-19 vaccine.

The PTI Chairman came down heavily on Pakistan Muslim League-Nawaz (PMLN) vice-president Maryam Nawaz, saying that she [Maryam] has no shame as she procures machinery from India for her son-in-law. Imran bashed Maryam over saying to quash the health card, saying that in reply, Shehbaz said that his government would close the health card.

Expressing his concern over Pakistan’s not being able to become a "welfare state", the former premier said that he [Imran] had seen the principles of a "welfare state" in the UK, after which he had decided that if he got an opportunity to rule, he would put the country on track by following the principles of Riyasat-e-Madina. According to the PTI Chairman, without a health card, people may have become indebted and helpless as a result of diseases.

Talking about the year 1960, Imran stated that Pakistan was on the path to exemplary progress at the time, but that due to the baggage of bad decisions, the country was unable to achieve sound footing development. The PTI Chairman slammed the PML-N, claiming that during its [PML-N’s] last five-year tenure, the country’s exports did not boosted. Taking a dig at the newly elected finance minister, Ishaq Dar, the PTI Chairman said that the person [Dar] who was responsible for the economic woes has been elected again as the finance minister.

The PTI Chairman slammed PML-N and PPP leaders, claiming that Nawaz Sharif and Asif Ali Zardari amassed wealth by leaving the people in debt. Taking a jibe at PML-N supremo Nawaz Sharif, Imran said that when he [Nawaz] was all set to be arrested during the Musharraf regime, he [Nawaz] ran away by taking an NRO. He said that this thing is out of his [Imran’s] mind, that is, whether the guardians of the country are not looking at what is going on in the country.

Talking further about the leaked audio, Imran claimed that he came to know through the PM’s office that his [Imran’s] and Azam Khan’s audio had been released, which is against the Official Secret Act. While again targeting Election Commission of Pakistan (ECP) Sikandar Sultan Raja, Imran said that no one could be as ‘cheap’ as the ECP CEC is. Claiming that he [Sikandar Sultan Raja] is a servant of the Sharif family, Imran said that the CEC has no shame to resign after the audio leaks.