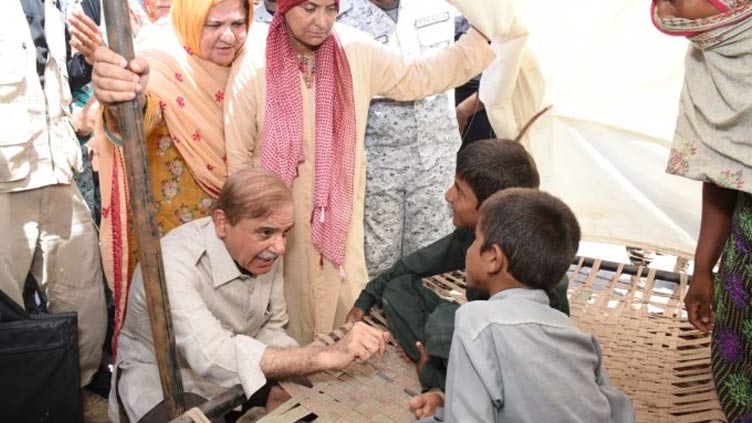 DADU (APP) - Prime Minister Shehbaz Sharif on Tuesday urged the nation to work in unison by extending a helping hand to the people suffering with the devastation in the wake of massive floods.

Terming as noble service the helping the people in distress, he stressed the need for rising above politics and the so-called ‘number game’ in order to converge the energies to help the flood-hit people.

Without naming any politician, he pointed out that the post-flood situation in the country demanded to reach out to the flood victims instead of holding jalsas (public gatherings).

In his address to the locals during his visit to the tent-city set up in Jhakro village to accommodate the flood victims, he said all the segments of society including the federal government, provincial governments and the people across the country needed to work hand-in-hand with an objective to mitigate the problems of flood-stricken population.

The prime minister arrived in Sindh’s flood-affected area of Jhakro in Dadu district this morning to oversee the relief and rehabilitation efforts.

He expressed satisfaction over the efforts made by the Sindh government, armed forces and the disaster management authorities in providing relief to the flood-affected people.

PM Sharif said the flood affected 33 million people including 1,600 dead and inflicting a huge loss of $30 billion to the national economy.

He mentioned that the government had disbursed Rs 42 billion among the flood-affected people as part of relief and rehabilitation activities.

The prime minister said Pakistan alone could not overcome the challenge of massive floods and called upon the world to amplify its assistance to Pakistan.

He expressed gratitude to the philanthropists for providing relief assistance to Pakistan in the hour of need.

He assured the flood-hit people that the government would leave no stone unturned in extending help to them.

lanked by Sindh Chief Minister Murad Ali Shah and senior officials of the provincial government, the prime minister visited the tent-city where he was given a detailed briefing on the damage caused by floods.

PM Sharif was apprised that floods affected all areas of district Dadu, leaving 37 persons dead while damaging its infrastructure and crops.

During his interaction with patients at the medical camp, the prime minister inquired about their health and assured them of best possible treatment.

He directed the authorities concerned to ensure availability of necessary medicine at the camp to cope with the emerging challenge of malaria, diarrhea and other epidemics and breakouts.

The prime minister also visited a makeshift school set up in the premises of the tent-city aimed at preventing loss of education of the students after the floods swept away their schools.

He announced on the occasion construction of a smart school for the children of the area equipped with latest technological facilities.