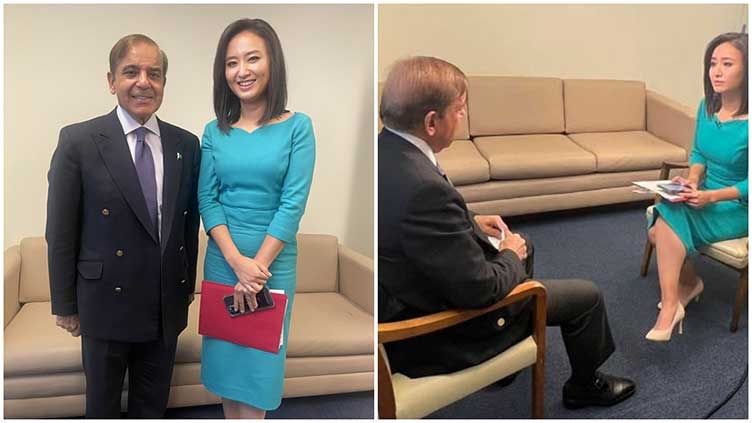 NEW YORK (Dunya News) - Prime Minister Muhammad Shehbaz Sharif has made an urgent appeal to the international donors for debt relief and special programmes for rehabilitation of flood-affected people of the country.

In an interview with Bloomberg in New York today, he said Pakistan needs additional funds to tackle the destruction wreaked by climate induced catastrophic floods.

The Prime Minster said it is impossible to revive our economy with this unprecedented destruction without substantial debt relief.
He said we have a recent IMF agreement with very tough conditions compelling us to impose taxes every month on electricity and petroleum products.

Shehbaz Sharif further said he has talked to Paris Club and IMF in this regard.

He said while the country is already facing an economic crunch, the unprecedented floods displaced millions of people, destroyed standing crops on millions of hectares besides destruction thousands of houses.

The Prime Minister said we now have to rehabilitate these millions of people, provide them safe housing, medical facilities, build climate resilient infrastructure and restore agricultural lands destroyed by floods.

He said Pakistan will also have to import tons of wheat this year to meet its food requirements as millions of acres of agricultural land has been inundated by floods.

The Prime Minister said it is very unfortunate that Pakistan’s contribution in carbon emission is only zero point eight percent but it is among the ten most vulnerable countries to be affected from climate change.

Referring to his interactions with world leaders on the sidelines of UN General Assembly session, Shehbaz Sharif said the whole international community has rendered us all-out support realizing the calamitous situation.

To a question about oil import from Russia, he said he has talked to President Vladimir Putin in this regard but nothing has been finalized yet.

To a question about India, he said if India wants to talk, Pakistan is ready to negotiate on all outstanding issues with Kashmir on the top of agenda.

He said the two countries must realize that we are neighbours forever and should channel our abilities and resources for the good of peoples instead of fighting each other.