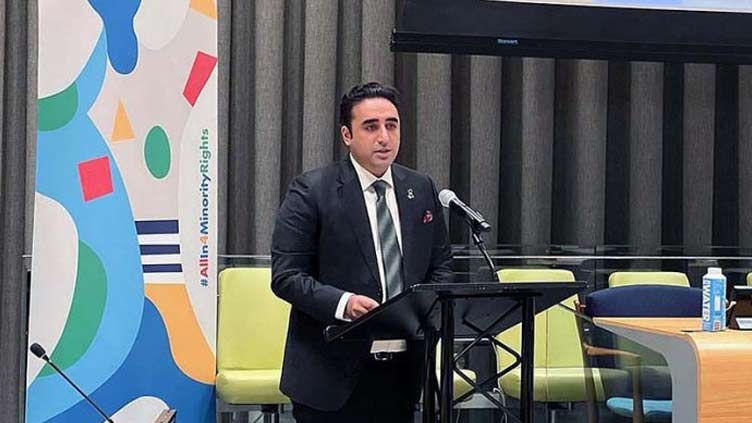 NEW YORK (Dunya News) – Foreign Minister Bilawal Bhutto Zardari said on Wednesday that peace cannot be established in South Asia without resolving the Jammu and Kashmir dispute peacefully on the basis of justice and international laws.

He expressed these views while addressing the ministerial meeting of the Coordination Group on Jammu and Kashmir of the Organization of Islamic Cooperation (OIC) on the occasion of the 77th session of the United Nations General Assembly.

The foreign minister said that Pakistan is ready to resume dialogues with India to resolve the dispute, however, the onus is on India to create a conducive environment for such talks.

“The OIC Contact Group has played a crucial role in drawing international attention to the deteriorating situation in Occupied Jammu and Kashmir, and the forum should play its role in raising this issue at relevant UN fora,” he said.

He said that through this discussion, we need to assess the current political and security situation and its consequent impact on the human and human rights situation in India s illegally occupied Jammu and Kashmir and ways to deal with these challenges.

Later, speaking at the 12th Ministerial Meeting of the UN Group of Friends of Mediation co-chaired by Turkiye and Finland in New York, Bilawal urged UN Secretary-General to persuade India to reverse its unilateral measures and agree to promote an equitable solution to the Jammu and Kashmir dispute.

Bilawal Bhutto Zardari said the UN Security Council should give full support to the Secretary- General in using his good offices to this end.

He said the Jammu and Kashmir dispute is one of the oldest issues on the agenda of the Council. At the outset, the Security Council decided that "the final disposition of the State of Jammu and Kashmir will be made in accordance with the will of the people expressed through the democratic method of a free and impartial plebiscite conducted under the auspices of the United Nations".

The Pakistan Foreign Minister said unfortunately, over the last seven decades, India obstructed the efforts of the UN mechanisms to implement the Security Council s resolutions on Jammu and Kashmir. The continuation of India’s illegal actions was manifested in the unilateral measures taken on and since 5 August 2019 to annex the occupied territory of Jammu and Kashmir without even the fig leaf of legal justification or plebiscite.

Bilawal Bhutto Zardari said the Secretary General s repeated calls for a  surge in diplomacy  for peace is both urgent and important. He said such a surge of diplomacy must emanate from the United Nations.

He said Pakistan also commends the UN Secretary General and President Erdogan of Turkiye for successfully mediating the landmark Black Sea Grain Initiative. In the end, he said that Pakistan is a proud member of the Group of Friends of Mediation and he would like to thank the Chairs and all the members of the Group for their work.