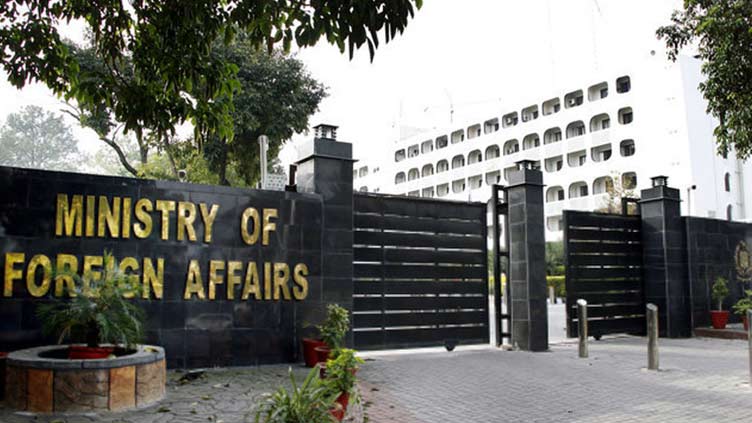 ISLAMABAD (Dunya News) - Pakistan Thursday strongly urged the international community to call upon India to end its gross and systematic violations of human rights in Indian Illegally Occupied Jammu and Kashmir (IIOJK), revoke its illegal and unilateral actions since 5 August 2019, and free all political prisoners including the true Kashmiri leaders.

Speaking at the weekly press conference here, the Foreign Office Spokesperson said, “Let me at the outset refer to the continuing grave human rights and humanitarian situation in Indian Illegally Occupied Jammu and Kashmir.”

He said the unabated wanton state-terrorism by the Indian occupation forces resulted in martyrdom of three more young Kashmiris in fake encounters in Shopian and Islamabad districts of IIOJK.

Today the Indian Illegally Occupied Jammu and Kashmir is the world’s most heavily militarized zone, which has in fact been turned into the world’s largest prison – where people are not allowed to speak freely; APHC leadership, youth, journalists, civil society and human rights defenders are jailed and silenced. This is an unacceptable and condemnable situation.”

The Spokesperson reiterated that a just, peaceful resolution of the Jammu and Kashmir dispute in accordance with the relevant UN Security Council resolutions and wishes of the Kashmiri people was indispensable for lasting peace in the region.

The Organization had previously documented these egregious violations in its three reports published in as many years.

He said the growing Indian repression and suppression of fundamental rights in IIOJK had been extensively monitored, reported and documented by the UN Human Rights machinery, independent civil society organizations and global media.

“The UN High Commissioner for Human Rights as you are aware has also issued two reports in 2018 and 2019. The High Commissioner and several civil society organizations have also consistently raised deep concerns in several sessions of the Human Rights Council over the wide range of human rights crimes being committed by India in the internationally recognized disputed region of Jammu and Kashmir. UN experts have publicly characterized the human rights situation in IIOJK, as in ‘free fall’.”

Pakistan once again, urged the United Nations, its human rights machinery as well as States to counsel India to rescind its illegal and unilateral actions taken since 5th August 2019, end forthwith its gross human rights violations of the Kashmiri people, provide access to independent organizations and comply with its international human rights obligations, he added.