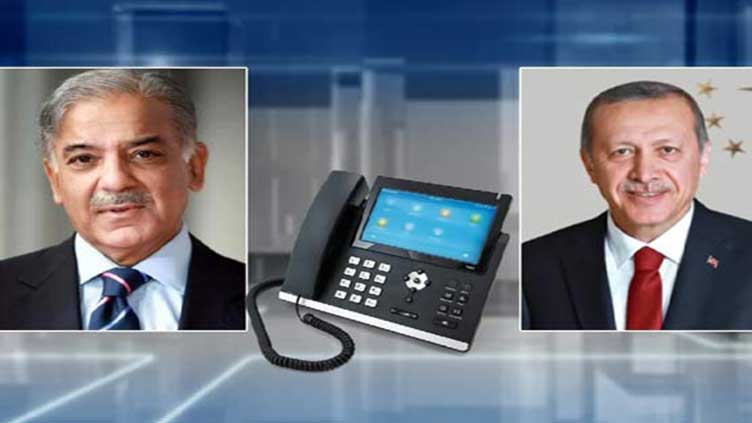 ISLAMABAD (Dunya News) - Prime Minister Shehbaz Sharif spoke to Turkish President Recep Tayyip Erdogan on Sunday and expressed his gratitude to him and the people of Turkiye for extending humanitarian relief assistance to Pakistan.

The relief assistance from Turkey was in the form of immediate dispatch of tents, emergency food items, and medicine via 12 Turkish military aircraft, four "Goodness trains" and two Turkish Red Crescent trucks.
The Prime Minister exclaimed that this is in the truest tradition of the Pakistan-Turkiye exemplary relationship.

He also expressed his gratitude for the visit undertaken on September 1, 2022, as a gesture of solidarity and support, by Suleyman Soylu, Minister of Interior, Murat Kurum, Minister for Environment and Urbanisation, the Head of AFAD and representatives of TOKI to see the devastation caused by flash floods for themselves.

Sensitising President Erdogan of the havoc caused by the riverine floods, the Prime Minister stated that, as per initial estimates, the floods were likely to reduce Pakistan’s GDP by over 2 percentage points. He underlined that the ongoing floods have devastated millions of acres of standing crops, houses and critical infrastructure in the country.

Prime Minister Sharif conveyed that Pakistan was grappling with the immediate challenge of averting imminent food insecurity in the country as well as providing for the rescue and rehabilitation of the victims of this climate-induced calamity.

The Prime Minister briefed President Erdogan about the ongoing relief activities by the government and expressed his intention to seek Turkiye’s assistance in overcoming the food shortage as well as in undertaking reconstruction and rehabilitation of the flood-affected areas.

In the bilateral context, Prime Minister Sharif reaffirmed his commitment to boost relations in all areas.