Pakistan suffering due to environmental pollution of others: UN chief 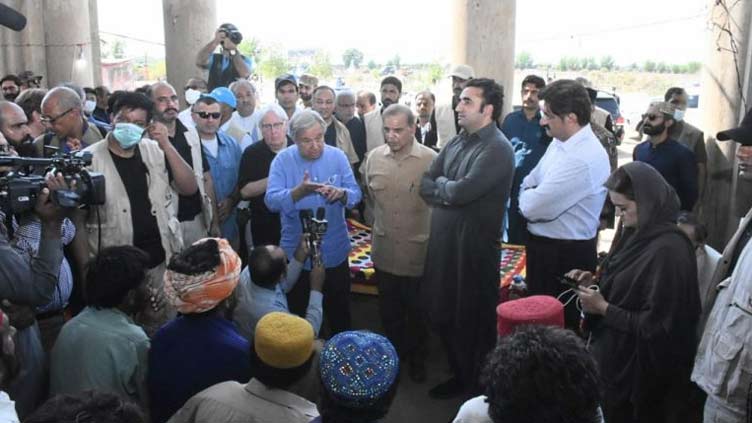 Pakistan suffering due to environmental pollution of others: UN chief

Pakistan suffering due to environmental pollution of others, says UN chief

LARKANA (Dunya News) – Prime Minister Muhammad Shehbaz Sharif on Saturday said that the federal government was fully cognizant of the sufferings and problems of the flood affectees and reassured that the federal and provincial governments would fully assist and support them in this hour of distress.

Talking to flood affectees along with United Nations Secretary-General Antonio Guterres, the prime minister said that an amount of Rs70 billion allocated by the federal government was being disbursed among each flood-affected family under Benazir Income Support Programme (BISP).

He told the people that the UN secretary-general had come all along from New York to offer grief and sorrow over the loss of about 1300 lives and thousand others who had been injured in the recent flash floods.

He said that Sindh province suffered from huge losses, where crops were damaged and livestock swept away. The UN secretary general arrived here to express solidarity with the people of Pakistan, he added.

Speaking on the occasion, Minister for Foreign Affairs, Bilawal Bhutto Zardari expressed gratitude to the prime minister and the UN secretary general for their support and solidarity.

He said it was a historic event as the UN secretary-general had arrived Larkana, adding that the federal, provincial and the international community would join hands to rebuild again with such structures that could resist the future calamities.

United Nations Secretary-General Antonio Guterres, on the behalf of the UN, expressed solidarity to all those who suffered due to the terrible floods in Pakistan.

Guterres said “Voice of the UN will be exactly the same of Pakistan.” He said that monsoon season had always been unpredictable.

The developed countries had been affecting the global environment, and due to the pollution, they had been making the climate warmer and warmer, which resulted into more floods and glacial melting and giving rise to catastrophic situations like being witnessed in Pakistan, he opined.

Guterres said that Pakistan was not responsible for this environmental pollution, but it was still suffering due to the pollution of others.

The UN secretary general stressed upon the developed countries to massively support Pakistan due to the pollution they had released, impacting the global environment.

He further observed that Pakistan had no resources to compensate for the loss of lives, crops and livestock. “Those who had created such situation must massively support Pakistan as Pakistan can’t do it alone. I am not asking for generosity, but for justice,” he added.

He said that his message to the world community would be to stop this war on nature as the nature would not forgive, stop pollution that was creating vital changes and contributing to the warming of the planet.

Narrating his background, he said that he belonged to a farmer’s family in Portugal, and that he could realize the sufferings, and pains over loss of houses, crops and cattle.

Praying for the alleviation of flood affectees’ sufferings, the UN secretary-general said that he hoped for a miracle to set the things rights. Later, Guterres visited the UNESCO World Heritage archeological site of Mohenjo-daro where he was briefed by the relevant authorities.

Talking to media, the United Nations secretary general reiterated that Pakistan had no capacity to rebuilding and reconstruction and urged the global community to play their role in this regard. He said that the recent floods in Pakistan had been the result of climate change and the country was among the top countries that had been facing the adverse impacts of such phenomenon.